There's certainly nothing unusual about a pizza party among classmates to celebrate the end of a school semester.

But there's something a little different about this one, taking place on a sunny afternoon at VCC's Broadway campus in East Vancouver.

Sitting quietly in the front row, finishing lunch and talking among peers, is Rino Manarin. He's a part-time student and like most others in his class, he likes pizza, surfing the Internet, and has goals for the future.

After three successful decades in the workforce and a retirement plan that included taking up woodworking, Manarin, who turns 81 in December, woke up one day and decided to go to college. 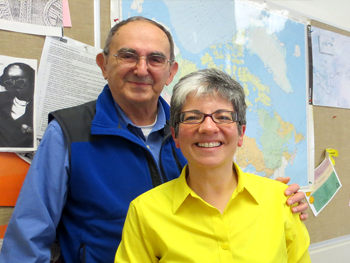 Now, he's an octogenarian with a student ID number.

"It was something missing from my life. I admired guys who had degrees and always encouraged people I worked with to get an education."

Manarin may have never had a piece of paper framed on the wall of any office but if stories count as schooling, you might say he's earned a PhD in life experience.

Shortly after graduating from high school in Castlegar, Manarin ended up in France with the Canadian Air Force, where he specialized in electronics, played clarinet in a travelling music and dance band, and met the love of his life.

"Those were probably the best five years of my life," he says. Still, the couple -- married now for more than 50 years -- returned to Canada where they started a family and where Manarin would never shy away from opportunity, taking a job in the Canadian Arctic during the Cold War, and even dabbling in real estate.

For the most part though, his future would lie in electronics, instrumentation and project management, primarily in the pulp and paper sector. In the 70s, 80s, and 90s, he lived and worked all over B.C., took a consultant job in Finland for several months and even helped get the PNE's commemorative Japanese gardens project blooming.

Not bad for a guy who only graduated high school. But for this particular guy, it wasn't enough.

"I wanted to do something meaningful, to accomplish something."

According to his English teacher, Rita Acton, Manarin has already accomplished more at VCC than he probably knows.

"When students faced challenges in class, they would turn to Rino for guidance and advice. He is compassionate and inspiring, the true definition of a lifelong learner."

After 12 months taking part-time English and math classes at VCC, Manarin discovered that it's a place where students learn about hope.

"Coming back to school was difficult for me," said classmate Kelsey, who didn't want to use a last name because of an ongoing struggle with sexual identity. "Rino was my first pal, my closest pal. I remember he told me it didn't matter if I was a boy or a girl because I was a smart person. That meant a lot to me."

Like Kelsey, Manarin admits that going to school hasn't been a walk in the park, even for someone who has been through as much as he has, including the loss of an adult son to an avalanche.

He recalls growing up in Castlegar like it was yesterday, but memorizing math formulas has tested his commitment to adult education.

"Math and Algebra are very hard. It's a lot to remember. But I'm going to keep at it."

So far, it's all been worth it. He has earned a few college credits and plans to take anthropology and Canadian history courses at Langara as part of a broader plan to earn a general studies diploma.

He's healthy, happy and ready for the next chapter.

"When I said I was going to school, everyone I knew went out to buy suits for my graduation."

At his age, that's pressure he's learned how to handle.