Alex’s story: family and fusion in the restaurant business 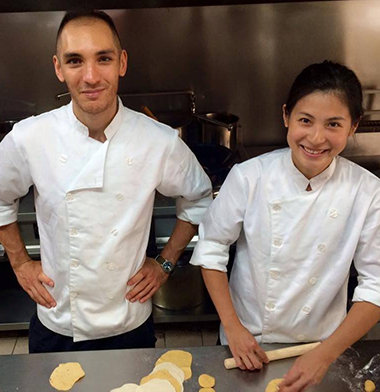 For many kids, growing up Canada today means juggling multiple cultures. While English at school or work may be the norm, many second- and third-generation Canadians are also working hard to keep their cultural heritage alive, be it through language, traditions, or food.

Alex Holliday was born and raised in North Vancouver, the third generation in a family of Chinese restaurant owners. Although he grew up helping his mother operate Capilano Heights Chinese Restaurant, he never worked the kitchen. Still, Alex had a passion for the business and a desire to carry on the family tradition.

It was while studying Chinese in Taipei that Alex and his girlfriend (now wife) Annie decided they wanted to open a restaurant together. First, though, Alex knew he needed industry training. “I wanted to learn more about my culinary heritage as well as how a professional kitchen works,” he says.

Growing up locally, Alex already knew that VCC’s Asian Culinary Arts program was the perfect fit. The five-month program, established in 1975, provides commercial culinary training in Cantonese, Mandarin and Szechuan food as well as other Asian cuisines such as Japanese, Malaysian, Thai, Singaporean, Vietnamese, and Korean. Courses also cover the business side of restaurant operations.

“The technical cooking skills that I learned were of course useful beyond measure,” says Alex, “but I think what I value most were the management skills.” He credits department head Barry Tsang with instilling in him the highest of standards. “Anyone can teach you how to fry rice, but it takes someone special to teach you how to run a kitchen,” he says.

Always driven to expand his horizons, Alex has since returned to Taipei where he now owns and operates the trendy Taiwanese-Cantonese fusion restaurant, Drunken Monkey (currently relocating).

Though the restaurant business seems to run through his veins, Alex maintains a strong appreciation for the hard work it took to learn the trade as well as keep connected to his culture.

“It was a bit of a journey for me,” he says. “I went to Asia to learn Chinese, came back to Vancouver to study culinary arts, and finally took this fusion of experience back to Asia where my grandfather set out from 70 years ago.”

Curious about a career in cooking? Join our next culinary arts info session to tour the kitchens, meet the chefs, and learn more about our programs.