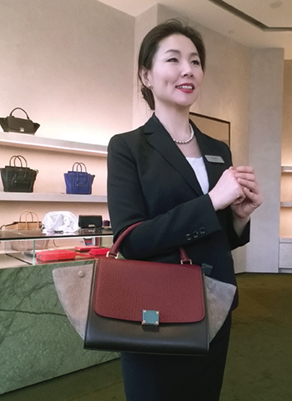 In her home country of Korea, Jacqueline Yang had built up an impressive resume. Already a media personality and entrepreneur, in 2002 she served on the Organizing Committee for the FIFA World Cup in Korea and Japan, where she was responsible for coordinating the schedules of international dignitaries and VIP’s.

It was this position that solidified Jacqueline’s next career goal: to work in the luxury industry serving high-end clientele.

‌In 2004, however, Jacqueline immigrated to Canada for her children’s education. Career-wise, this meant starting over in more ways than one.

In Vancouver, Jacqueline soon found work with fashion retailers Harry Rosen and Holt Renfrew. Yet even though she regularly exceeded sales targets and won awards, she knew she needed to improve her English before taking her career to the management level.

Throughout her studies, Jacqueline was also a regular visitor to the VCC Learning Centre, which offers free, daily tutoring and career services to all VCC students. “I am so grateful for the tremendous support I received at the Learning Centre,” she says. “It hasn’t been easy learning a new subject in English, especially after many years of working.”

As Jacqueline began to apply for jobs, VCC’s tutors remained by her side, helping to fine-tune her cover letters and resumes, even edit her LinkedIn profile. When interviews started happening, the tutors would rehearse questions and answers with Jacqueline until she felt comfortable and confident.

After graduating, Jacqueline’s was soon hired at a dental corporation. She excelled at managing several clinics, but still held on to her career goal of returning to the world of luxury.

It was only a matter of time before Jacqueline caught the eye of the hiring team at Vancouver’s new, then unopened Nordstrom department store. Now a sales associate in the designer handbag department, Jacqueline is not only back to interacting with VIP clientele, but thanks to her English and administrative skills, she’s well on her way to a management position.

We wish Jackie all the best in her continued rise to the top!

All VCC students have access to free tutoring to help with academics and career transitions. Learn more by visiting the VCC Learning Centre.