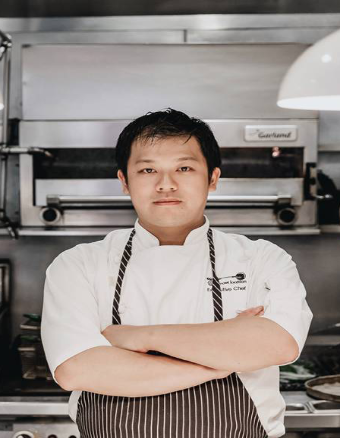 With one-of-a-kind goods on display in bright, sleek surroundings, the boutique part of Secret Location feels more like an art gallery than an upscale concept store, the kind of place you can imagine Gwyneth Paltrow frequenting. You’ll find exclusive items like glass-heeled footwear by Aperlaï Paris, the Italian Cor Sine Labe Doli label’s hand-painted ceramic bow ties, and designer Olympia Le-Tan’s storybook-inspired clutches. It’s been included in Vogue Paris’s top-10 list of concept stores, and there’s nothing like it in Vancouver.

Lau comes to the elegant restaurant following three years at MARKET by Jean-Georges, at the Shangri-La Hotel. Before that, the Hong Kong native who grew up in Vancouver worked at the Westin and Metropolitan hotels, having studied at Vancouver Community College and the Pacific Institute of Culinary Arts. His passion for cooking goes way back to his childhood.

“I was very much involved in the kitchen with my grandma and my mom,” Lau says in an interview with the Georgia Straight. “I always helped out; I always liked to hang out in the kitchen and was curious about what was going on. As I grew older and started watching cooking shows on TV, I slowly found I had a natural sense for food. I might not have cooked or tasted something, but I could make sense of it in my head, so I started to think about it as a career.

“Cooking is science and art combined,” he adds. “I love trying to refine things over the course of time. You’re always reaching for perfection, but you’re never perfect; you’re always trying to get better, so you need that level of self-discipline.”

If Lau isn’t faultless, he’s certainly accomplished. In 2011, he represented B.C. at the Canadian Culinary Federation’s National Chefs Challenge and won. The year before, he earned gold at the B.C. Chefs’ Association’s Roasted competition, which involves a black box of mystery ingredients.

While he was working at MARKET, there was a possibility of transferring to a hotel in Asia, but Lau didn’t like the idea of moving away from family. And although he was proud to be part of the team there, he says he was ready for something different. At Secret Location, he’s unleashing his creativity.

Consider Food & Time, a series of themed six-course tasting menus now under way. Each commemorates a particular moment in time, telling stories through food and merging past and present. The event’s kickoff menu, La Belle Epoque, Paris, celebrated France’s joie de vivre through a dinner based on chef and restaurateur Auguste Escoffier’s five mother sauces. There was poached chicken in suprême sauce with “shattered” vol-au-vent, and sole terrine with black truffle in mousseline sauce...

For the full story, see the original article in The Georgia Straight.

Can you take the heat? Tour our kitchens, meet our chefs and learn more about culinary arts programs at VCC Info Night on April 20. RSVP now and you could win an iPad mini!