With parents who ran a restaurant in Vernon, there was no way Eleanor Chow Waterfall was ever going to follow in their footsteps. Even though she adored baking as a child and her mom would routinely tell her “You should be a chef!” she was turned off by the industry’s never-ending slog.

Chow Waterfall was studying humanities at university when a trip to a local bookstore changed her mind.

“I remember going to Chapters when I was 18, and I started looking through all these beautiful cookbooks,” Chow Waterfall says by phone. Petits fours, lemon tarts, layer cakes: images of so many exquisite desserts ignited in her a passion. “I just thought, ‘I can do this. I want to do this.’ ”

Shortly thereafter, she applied to Dubrulle Culinary Arts at the Art Institute Vancouver. By the time she was 22, she had already worked at Bearfoot Bistro and the now defunct La Rua, both in Whistler, and went on to open Feenie’s after working at Lumière.

Next she was off to Blue Water Café before spending several years at Chambar and its sister restaurant, Café Medina. In 2012, she decided to go it alone, opening Cadeaux Bakery. The Gastown spot serves all of the delicacies she remembers falling in love with in those cookbooks and more: truffles, cheesecakes, croissants, danishes, and then some.

She’s among a group of culinary professionals who rarely get the kind of celebrity status increasingly bestowed on restaurant executive chefs. They’re the industry’s unsung heroes, the ones who toil away in the shadows but whose artistry and talent make people ooh and ahh.

It’s hard to believe that, before Thomas Haas came onto the scene just over a decade ago, the city’s pastry-making community was leaner than a skim-milk latte. Recent years, however, have seen a stronger presence of these culinary specialists, a dedicated and inventive bunch who are comfortable being in the background but who have been busy elevating the trade to sweet new heights.

For Chow Waterfall, as with her peers, the appeal of the craft is the creativity involved. “I’ve always really liked art,” she says. “When I was younger, I drew a lot and painted a lot and did sculptures. With pastry I have this freedom to do what I love and make people happy. It brings out the artist in me.

“All pastry chefs are artists, really,” she says. “Your plate is your canvas.”

Chow Waterfall, a mother of two whose youngest is a newborn, likes the challenge of pastry-making, too. Getting it right means being able to combine art and science. Plated desserts, she explains, might require several different cooking techniques to incorporate multiple elements like sauce, fruit, starch, cream filling, and ice cream into a single dessert, all while making the final product look aesthetically irresistible.

“Desserts should be sexy,” says Chow Waterfall, whose most popular dessert is a London Fog cake, a five-layer vanilla cake with Earl Grey–infused syrup, Earl Grey milk-chocolate ganache, white-chocolate mousse, and Chantilly cream. “We want to sell desserts. They should be bright and vibrant.”

For Chau Veggie Express’s Andrew Han, making pastry is “soul-satisfying”—certainly much more so than the job he used to have with the Canada Revenue Agency handling tax objections.

Most of the desserts at the plant-focused Vietnamese restaurant are vegan, which presents the Vancouver native with an added challenge—and opportunity.

“Doing nonconventional pastry products allows me to push the envelope even more,” Han says by phone. “Pastry is a science, and when you omit ingredients like butter and cream, you take it one step further than the traditional French or Italian pastry to re-create those tastes and textures with different ingredients.”

He uses products like coconut oil and toasted nuts in his desserts, as well as Asian spices like cardamom, which he says masks the taste of not-very-tasty vegan butter. Among his most popular creations are coconut-vanilla-bean tapioca, matcha snickerdoodles, and satay-peanut-butter cookies.

“I currently have a vegan jasmine-tea crème caramel on the menu that has a thin layer of dark chocolate ganache and brûléed caramel sauce, topped with chocolate streusel,” Han says. “I love using Asian teas. Other items on the menu I love are the coconut pandan leaf with kale vegan ice cream and the Thai milk-tea vegan ice cream. All of these flavours remind me of my childhood, which is where I draw a lot of my inspiration from.”

Adam Chandler grew up in Toronto and credits his engineer father for instilling in him a penchant for precision—which the chocolatier and co-owner of Beta5 says has served him well as a pastry chef.

“I always had this kind of mathematical approach to things, and that’s beneficial on the pastry side,” he says in an interview at his Industrial Avenue shop. “You’re working with ratios, and that’s what really got me connected to it. And so did the art of it. It’s really fun starting with flour, butter, chocolate, which really have no form, and being able to create something completely unique.

“On the culinary side, when you’re starting with a piece of fish or a piece of steak, you want it to look like that when you’re finished. With pastry, we have total freedom to work with flavour and texture. It’s really a blank canvas.”

After completing his formal culinary and pastry training at Northwest Culinary Academy of Vancouver, Chandler honed his skills in France and Belgium. Back in Vancouver, he was on the Fairmont Pacific Rim’s opening team for the 2010 Vancouver Olympics, launching his own shop in 2012. He has since earned several medals at the International Chocolate Awards.

Aside from chocolates, caramels, and candy bars, Beta5 specializes in cream puffs. Popular in Paris, the “choux” at Beta5 come in flavours like Vietnamese coffee, raspberry Earl Grey, and spiced mango. Not that Chan-dler has to worry about overindulging in them: “I don’t really have a sweet tooth,” he says. “I like conceptualizing and making them. That’s what I gravitate to.”

Elena Krasnova, whose Mon Paris Pâtisserie is to open in Burnaby in December, says that pastries were a foreign concept throughout her childhood in Volgograd during the former Soviet Union’s perestroika period. Bare necessities were in demand, and she learned to express herself creatively, to make something out of nothing.

When the former accountant had the opportunity to go to France, she discovered the possibility of working creatively with food. “I saw how totally different a culture it was in terms of cooking; pastry is an art for them,” Krasnova says by phone. “I never thought of being a pastry chef growing up.

“Now Russia is starting to develop more culinary arts. Twenty years ago we didn’t have anything. It [becoming a pastry chef] was not even a choice. No parent would want to have their kid go into culinary arts.”

Her plan is to focus on the kinds of pastries you’d find in her bakery and café’s French namesake, plus her own contemporary creations—like baked Limoncello tarts, ricotta tarts with jasmine-infused caramelized pears, coffee-cream profiteroles with whipped lemon ganache, and more. 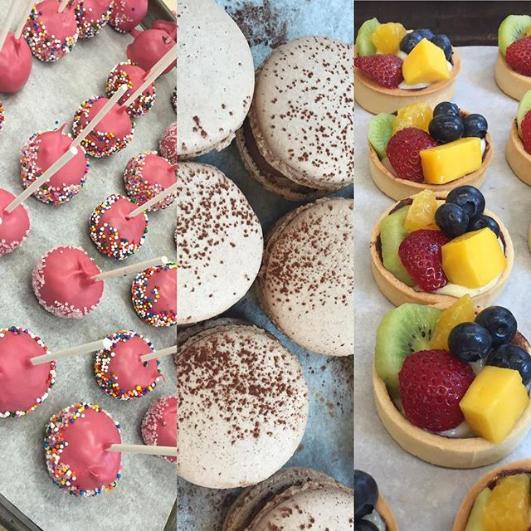 Éclairs could be the next French treat to become especially popular here, as they have in Paris and New York, says pastry chef Leanne Bentley. She teaches the trade at VCC and says she enjoys sharing with students what’s trending in the industry—like the recent rise of ice-cream sandwiches, for instance.

Another recurring theme she’s seeing is that of diners wanting to know where their food comes from. It’s not just the chicken or fish on their plate that they wish to be local, organic, and sustainable; more people are asking where the ingredients in their viennoiseries are sourced, too.

Over the last decade, Bentley has worked at several large hotels, including Fairmont St Andrews in Scotland and downtown Vancouver’s Fairmont Waterfront. Those kinds of positions come with a hefty measure of stress—which she says is part of the appeal.

“The pressure is half the fun,” Bentley says in a phone interview. “But once you’ve done that banquet for 600, there’s no better feeling. Pastry has a precision, and I like the controlled creativity. There’s always a formula or ratio; there’s always a few rules you have to follow, but I like it because it gives me just enough room to wiggle.

“I think most pasty chefs are fairly happy to be in the background,” she adds. “But I do think we should get our names on the dessert menu and get a little bit more of a shout-out every once in a while.”