A story about overcoming addiction and going to college

Mervyn Charles is experiencing a lot of firsts these days.

It’s the first time the recovering alcoholic has managed to stay sober for an extended period of time and the first time he has landed and kept a steady job that he really likes.

It’s also the first time Charles has ever stepped foot in a college classroom, an opportunity he never imagined possible a little more than two years ago when he was homeless, struggling with addiction and losing hope for the future.

Sitting at a coffee shop at the corner of Main and Cordova streets in Vancouver’s Downtown Eastside, a neighbourhood he calls home, Charles isn’t afraid to open up about his troubled past if it means helping others avoid making the same mistakes he did.

“I lost my apartment, my job, my family," Charles says in a soft Caribbean accent.

And it was all because of the bottle. He was running out of money, living a lie, and admits the loneliness was becoming too difficult to bear. 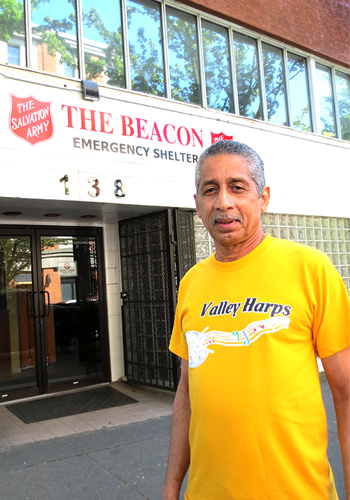 Then on a day that didn’t seem particularly special or more memorable than any other, Charles says he knew it was time to check into rehab. There was one spot left in the Salvation Army alcohol treatment program and he took it.

In the months that followed, Charles successfully completed treatment, was offered transitional housing and a job, and eventually awarded a scholarship to take a free  course at Vancouver Community College.

“I was so excited. I wanted to learn how to help others,” he says of his first post-secondary learning experience.

Every Tuesday night for three months, Charles walked five or six blocks -- sometimes in the pouring rain -- from his apartment to VCC’s Downtown campus for a class on counselling skills where he learned the value of listening.

Proudly he says, “I know I can be a real help to people now."

And he’s right. Charles practices what he learned at his full-time job as a midnight intake worker at the Salvation Army Beacon Shelter and spends his spare time walking around the Downtown Eastside offering a patient ear to people stuck in an all-too-familiar situation.

“I know how they feel. I’ve woke up on the streets too.”

At one time barely able to help himself, Charles is now determined to spend the rest of his life helping others.

Confident, clean and committed, his goal is to continue to work with clients at the Salvation Army and encourage more youth to stay away from drugs and alcohol.