VCC is OPEN today, Wednesday, Nov. 30. Classes will be running as usual. 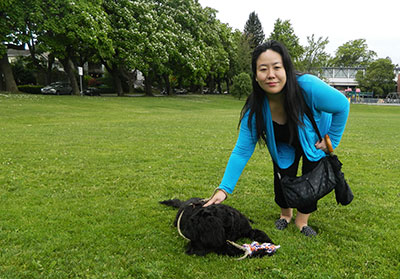 Chieko Thomas was in Vancouver on a student visa in 2010 when she popped into her local Starbucks one day for a caramel macchiato. When a caramel macchiato arrived on the counter, she grabbed it. A handsome stranger then kindly let her know she was holding his drink.

A few years later, the two were married, living in Vancouver and Chieko was preparing for a new career that was closer to her heart than she ever expected.

Having studied business administration in her home country of Japan, Chieko’s first step as a Canadian resident was to find similar work here. A friend recommended VCC’s (MOA) program, but when Chieko spoke to an advisor, she learned that her English skills didn’t quite meet the program’s Grade 12-level requirement.

There were two options available. She could either study independently for a few months and take a placement test, or enroll in ESL Pathways, a program specifically designed to teach natural communication skills for academic and business environments.

“I thought that might be better than taking a one-time exam,” says Chieko. “Exams make me nervous!”

After only a few months in ESL Pathways, Chieko managed to achieve the program requirement of Canadian Language Benchmark level 8 in all areas (reading, writing, listening, speaking). In March of 2015, she proudly entered VCC’s Medical Office Assistant certificate program.

In her MOA class, only Chieko and one other student were non-native English speakers. Of course, everyone was required to write essays and do front-of-class presentations. “It was intimidating the first time,” says Chieko, “but the things I learned in English Pathways really, really helped me.”

While medical office assistants are in demand in many areas, when it came time for her practicum, Chieko specifically requested a placement in an ophthalmologist’s (eye surgeon’s) office.

“I’m passionate about helping people with eye problems,” she says, “because I know what it’s like.”

Chieko explains that her husband Neil has lived with the painful effects of a misshapen cornea (the transparent part of the eye covering the pupil) his entire life. By the end of 2015, he will have had nine cornea transplants. “His immune system keeps rejecting the new corneas,” Chieko explains. “It’s ironic. It’s like he’s too healthy except for his eyes!”

While somewhat out of the ordinary, Chieko’s instructors found her a placement at West Coast Retina Consultants, where she has since obtained a permanent job.

Now in a rewarding career, Chieko reflects on the work it took to learn English for the Canadian workforce. “If I didn’t take English Pathways, I would probably still be struggling to qualify for business courses,” she says. To others considering studying ESL for career advancement, she offers some simple encouragement. “If you are ready for a commitment and study hard, I know, you can achieve so many things.”