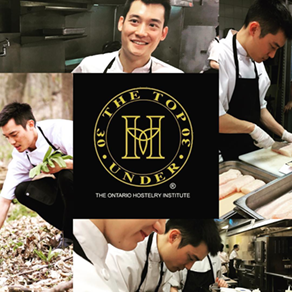 Can a person be born to cook? The case could be made for Takayoshi Li, Vancouver Community College (VCC) culinary arts alumnus, Chef de Cuisine at Ontario’s historic Ancaster Mill restaurant, and new recipient of the 2017 Ontario Hostelry Institute’s (OHI) Top 30 Under 30 award.

Even though Taka grew up in the kitchen—both his grandparents and parents were restaurateurs—he says he never developed a desire to do much more than help out in his family’s Vancouver eatery. “I would wash dishes,” he remembers, “but I never really wanted to cook.”

When Taka was deciding what to do after high school, his father recommended the well-paying career of a diesel mechanic, so Taka enrolled in heavy mechanical trades at VCC. During his first class, however, Taka realized it just wasn’t for him.

“Everyone was talking about cars and engines, and none of it interested me at all,” he says. “I had started to like cooking with my dad as well, so I signed up for culinary arts the very next day.”

Thanks to his talent, curiosity, and previous restaurant experience, Taka was snatched up by Chef Frank Pabst of Vancouver’s Blue Water Cafe after only one year in VCC’s Professional Cook program.

Since then, Taka’s career has taken him from Vancouver to Ontario, where he’s honed his skills among Canada’s culinary elite like Alvin Leung (Master Chef, R&D), Tyler Shedden (Café Boloud), and Marc St. Jacques (Auberge du Pommier and Ancaster Mill).

All the OHI Top 30 Under 30 award winners are first nominated by their peers, and then selected by a panel of expert judges. Taka is pleased with his award but would rather avoid the spotlight. “I guess they were impressed with how far I’ve come in such a short time,” he says.

Alongside the cooking skills he learned at VCC, Taka says one instructor’s advice has really stuck with him over the years. “Always be humble.”

“I’m still learning from other people all the time,” he says. “Even the cooks working under me.” His advice for up-and-coming chefs follows the same theme. “Build good relationships and take every opportunity you see. It will always lead to something.”

Cooks and chefs are in demand across Canada. Learn industry-ready skills from the best in VCC culinary arts.