Hamasa’s story: the courage to be Canadian 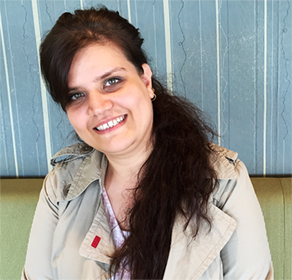 Hamasa Durrani always felt a little “different” than her brothers and sisters.

Of nine children, she is number five—the middle child. Growing up in Islamabad, Pakistan in an Afghan family, Hamasa was the only one with green eyes, the only one with a pale complexion. A self-described comedian and tomboy (nicknamed “Ahmad” by her brothers), she also has a gregariousness that is rare among girls raised in a strict, Muslim culture.

It was in high school that Hamasa began to write about the rights of women and girls in the Middle East. With the secret encouragement of her mother and two teachers, Hamasa’s works were soon getting published to underground websites and winning international awards.

Then, in 2013, when Hamasa was in her early 20s, her family’s immigration application to Canada was approved after a 10-year wait. In an instant, they plunged into an unknown culture, environment and language.

In her new home of Vancouver, Hamasa was immediately struck by the freedom people had to learn, to go where they pleased, and to speak their minds. Hamasa herself developed an instant love for sparkly makeup and ripped jeans, and a deep eagerness to participate in Canadian society.

Already proficient in multiple languages including Farsi, Pashto, Urdu and Punjabi, Hamasa now entered an English as an additional language (EAL) program at Vancouver Community College. In only a few semesters, Hamasa was carrying on lively conversations about everything from refugee politics to pop songs to her all-time favourite Canadian, Justin Trudeau.

“I know I make mistakes but I keep talking,” she says. “I tell people don’t be afraid.”

When not in school, Hamasa also worked to help support her family. For much of 2014 and 2015, she was employed at a local neighbourhood house running programs for children.

Sadly, it was here that Hamasa also encountered bullying and racism from a co-worker. “The lady told me people from my country don’t have any value over here,” she remembers. “She said no one will trust Muslims.”

Shocked and hurt, and despite her bold personality, Hamasa didn’t know what to do, so she quit the job and slipped into depression. “I turned into a really quiet person,” she remembers.

Continuing her EAL studies at VCC, Hamasa credits the positive environment and the support of her “awesome” teachers, especially Nora Ready and Tanya Cowie, for helping her return to her animated self.

One EAL assignment was to write a speech, and Hamasa chose a topic she knew well—the fight for women’s rights in Afghanistan and Pakistan. When a friend from Vancouver Island University (VIU) learned of the speech, she invited Hamasa to speak at an International Women’s Day panel on the VIU campus in Nanaimo.

For someone who'd spent her life using false names and publishing her views anonymously, the opportunity to stand up and speak to a live audience felt immense. “Am I dreaming?” Hamasa remembers asking herself, as she took the stage.

“This was my message to everyone,” she says; “no talent will be wasted if girls are given a chance.”

Hamasa’s favourite part of the experience was seeing men in the audience engaged with what she had to say. “They weren’t telling me to sit down, to wear my hijab, to get married,” she says. “Instead, they were telling me ‘we are here, we are with you.’”

After speaking on the panel, Hamasa says she felt more empowered than ever. She now calls her trip to Vancouver Island "a dose of medicine," curing her of the harassment she had endured.

Hamasa plans to complete her English prerequisites by the end of 2016, then enter VCC’s Early Childhood Care and Education program, with the goal of one day working directly with immigrant and refugee families.

“I want to be the first positive energy that they face,” she says. “I want to tell them that Canada cares. We are with you.”

VCC offers English as an additional languge programs for all levels of fluency and education.

Come see what it's like! Sign up now a free, interactive EAL lesson at Experience VCC on October 26.