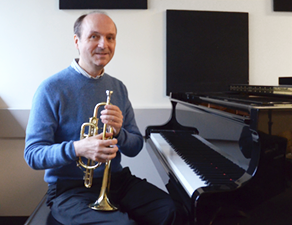 When Vancouver Community College (VCC) music instructor Alan Matheson says, “I’ve been doing this for a while,” he’s not kidding.

In fact, Alan can’t remember a time when music was not only a part of his life, but the thing that inspired and drove him more than anything else.

It helps, of course, to grow up in a record store, of which his father owned several in their hometown of Calgary in the 60s and 70s. While not musicians themselves, both Alan’s parents, as well as his grandmother, were avid music listeners and concertgoers.

Even as a 4-year-old actor on the children’s TV show Romper Room, Alan remembers bringing records on the show and talking enthusiastically about music with the audience. By the age of 5, he had decided unequivocally that he would become a composer, and began learning the piano.

A few years later, Alan’s father gave him a record by traditional jazz cornet player Bix Beiderbecke. “And my 9-year-old mind realized, holy moly, he was composing and playing at the same time,” says Alan, who then also took up the trumpet and began a lifelong fascination with jazz.

Today, as an accomplished performer, composer, and teacher in both trumpet and piano, Alan says that he continually sees this same intensity and passion in his students. “It’s rigorous getting into any music school,” he says. “Like anything in the arts, you do it for its own sake—for the art and the self-expression.”

Not counting his toddler-television debut, Alan’s own music career began right here at VCC, as a 17-year-old student in the then brand new music program. Alan credits jazz instructor Dave Robbins and trumpet instructor Barbara Butler for setting him on his professional path. “These two people actually changed my life in a lot of ways,” he says.

After moving on to study in Toronto and then Chicago (under internationally recognized trumpet professor Vincent Cichowicz), Alan found his way home to Vancouver in 1985. Shortly after, Alan became an in-demand piano and trumpet teacher, not only here at VCC but also the University of British Columbia and Capilano University; this, in addition to frequently performing with groups ranging from his own jazz and big band ensembles to the Vancouver Symphony Orchestra.

The braver, the better

Drawing on a lifelong commitment to playing, composing, and teaching music, Alan’s mentorship to VCC students is invaluable.

His main advice for those considering a music career is simple. “Get out there,” he says. Go to concerts, absorb the culture, talk to musicians. “I think a lot of young musicians are really quite shy. I had to push through that too, but I wanted to know about the music so badly that something would take over!”

His second tip: “Don’t dabble.” Choose your interest areas and find out as much as you can. “Dig into them,” says Alan, “and you will excel as a performer as well as a scholar.”

According to Alan, the advantage of a music program like VCC’s is that students are truly challenged to develop this expertise—in fact learning some skills that surpass many four-year university degrees—while also being exposed to a diversity of styles. In his decades of experience, Alan has found VCC to be one of the few environments in which music students can develop more than a single talent.

“It’s the ones who can do a bunch of different things, but do them all really well,” says Alan; “these are the people I see keeping going.”

If anyone, he would know.

See Alan play as a member of Sal Ferreras’ Poetic License, at the Vancouver Writers Fest Literary Cabaret on Oct. 21.

Interested in learning more about VCC’s diploma, degree, and community music programs? Join us at Experience VCC on Oct. 26 for an interactive workshop on rhythm studies, and listen to VCC’s student Motown band.