Michelle's story: from the military to math class 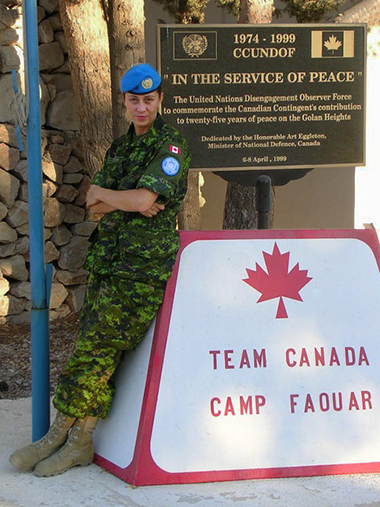 Michelle Chase always knew she would have a military career, not only because her family has a long tradition of serving, but she was always drawn by the personal challenge and the opportunity to see the world.

"I can't even remember all the places I've been," says Michelle of her 21 years in the Canadian Army. She recalls operations that ranged from domestic natural disasters like wildfires and ice storms, to Olympic Games security, to the civil war in Syria where she specialized in communication electronics and first aid with the B.C.-based 39 Canadian Brigade Group (CBG).

Of course, being a soldier for over two decades takes a physical toll. "Your knees are the one thing that's going to take a beating," says Michelle, describing routine fitness tests that involve carrying 25 kg of gear, dragging fellow soldiers, and digging trenches. In March of 2015, Michelle accepted a medical retirement with the outgoing rank of sergeant.

The word "retired," however, is not something you'd immediately associate with Michelle. At 40 years old, she has a bright, youthful energy and is eager to start her next chapter. After only one month of medical leave, she had already researched potential career paths, and decided on the Diagnostic Medical Sonography (ultrasound) diploma at the British Columbia Institute of Technology (BCIT).

To enter this program, however, Michelle needed high school-level prerequisites including Math 12, which she is currently completing here at Vancouver Community College (VCC).

"At first it was a little scary!" says Michelle about studying again for the first time in over 20 years. She was quick to adapt, however, and in spring 2016 even won VCC's Elizabeth MacLeod award, which recognizes progress and achievement in mathematics.

"The staff here are honestly some of the best staff I've ever come across in anything - not just in a school environment but in any organization," she says. "They really know what they're doing, and they really care."

Michelle is happy to have served her country and is proud of her military career, but is also excited about having a new purpose. "In the army, your basic trade is to survive and be able to fight battles," she says. "Now I'm really looking forward to doing something in the medical field. After spending 21 years of my life learning how to take life away, I want to spend the rest of my life helping to give it back."