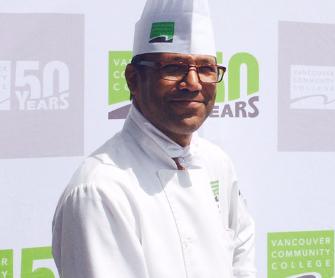 ‌Collin Gill runs Western Canada’s largest culinary school, one that has produced more than 12,000 chefs since it opened in 1965.

As a graduate himself of Vancouver Community College, Gill is proud that the institution has contributed to the growth of the local food scene. “Our grads are everywhere in the city, so we do feel like we’re a big part of what the city is,” Gill told the Georgia Straight in a phone interview. “And it’s true: Vancouver is a world-renowned city for its food.”

Like Gill in the earlier years of his career, VCC alumni are also likely to be found in kitchens around the world.

Two years after he got his post-apprenticeship Red Seal endorsement, a nationally recognized standard of excellence for tradespersons in Canada, Gill worked as a chef in Zurich, Chicago, and Washington, D.C., for almost a decade. He joined VCC’s culinary-arts department in 2003 and became its department head in January last year.

When plans were being drawn to celebrate VCC’s golden anniversary, Gill took part in meetings that came up with the idea of inviting graduate chefs to a gala that would raise funds for scholarships and training materials. Out of those, the concept for 50 Years. 50 Chefs. was conceived to bring together successful chefs like David Hawksworth, whose Vancouver restaurant bearing his name is a recent toast of the town.

Also participating in the event Tuesday (November 17) at the Rocky Mountaineer Station are young chefs Clement Chan of the pan-Asian establishment Torafuku and Jen Peters, founder of Nextjen Gluten-Free, a producer of buckwheat baking blends.

One of the 15 culinary stations at 50 Years. 50 Chefs. is assigned to Gill and members of the VCC culinary department. At another station, former Bishop’s executive chef Dennis Green is getting a reunion of sorts with Andrew George, an expert in aboriginal fare and author of the 2013 book Modern Native Feasts: Healthy, Innovative, Sustainable Cuisine. Green was still in high school when he got his first job at Avenue Grill, a Vancouver restaurant where George was working as a cook at the time.

Green recalled that during his time as a chef, he sent all his apprentices for additional training at VCC, where they would learn new skills to bring back to the workplace. The college is the only institution in the Lower Mainland that offers a training program that directly prepares students to get certified as a Red Seal cook. Green, now director of industry-workforce development with go2HR, the human-resource association for B.C.’s hospitality and tourism sector, noted that VCC doesn’t train only one type of student.

“The graduates that they put out are going into a wide range in the industry,” Green told the Straight in a phone interview. “They’re not focused only on training cooks and chefs for fine-dining restaurants. They’re training people who are going to work in all different industry sectors, whether they be chain restaurants or working in health care and institutional settings. Everybody needs some training, and they provide a broad base of training that covers a lot of skills.”

According to the industry-based Restaurants Canada, the industry is expected to make its 25th consecutive year of growth across the country in 2016. The nonprofit group representing the food-service sector anticipates that restaurant sales will increase by almost four percent, to $62 billion, next year.

Restaurants Canada also forecasts B.C. and Manitoba to post the strongest growth, with a rate of more than four percent. B.C.’s restaurant industry employs at least 170,000.
Green said: “An important part of keeping our economy growing is making sure we have the right people, and this…gala is really an opportunity to celebrate with a really big group of people that have all been part of that growth, and the contribution that VCC has made to the culinary community.”

VCC’s Gill is confident that the institution will continue to have a big part in the culinary future of Vancouver. According to him, there is a strong demand for food using fresh produce, meat, and fish from local producers, making VCC graduates a perfect fit.

50 Years. 50 Chefs. will take place from 7 p.m. to 11 p.m. on Tuesday (November 17) at the Rocky Mountaineer Station in Vancouver. Tickets are available through Eventbrite.