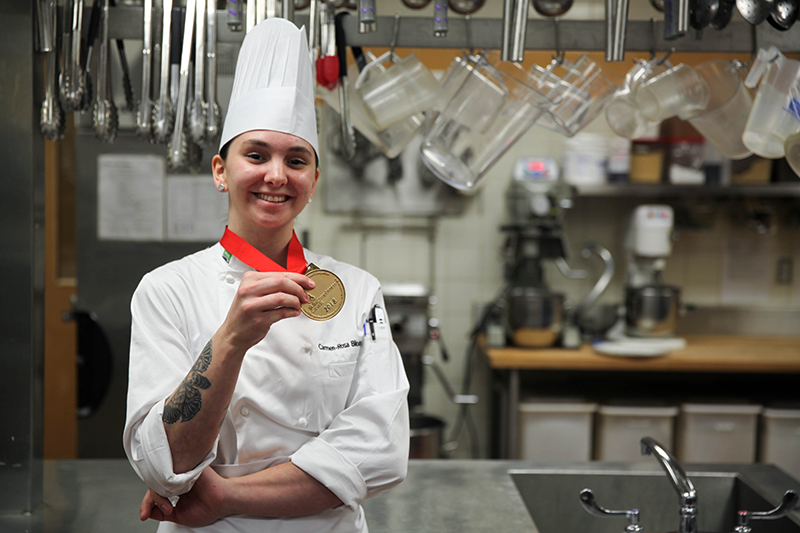 Ever since the Skills Canada regional competitions in early 2018, we’ve been following Team VCC from one podium to the next.

After an incredible 18-medal performance at the Skills Canada BC provincials in Abbotsford on April 18, our winners headed to Edmonton on June 4 to compete for top spots in the country.

We caught up with national gold medallist, recent Samuel Roberts Technical Secondary grad, and current VCC culinary arts apprentice Carmen to discuss her recent golden performance and find out what’s next for this rising star.

How does it feel to be the best secondary school cook in Canada?

It feels surreal, but when people congratulate me, it feels good. Like one day I’m living life and the next thing you know I’m 19 and I’m actually pretty good at something. It’s a successful feeling.

How long have you been cooking?

I started about one year ago. I was a banquet server and then a dishwasher at a country club in Maple Ridge. Then one day I got an opportunity to help with the cooking. I started by peeling potatoes, then the chef let me do more stuff. I also learned that an apprenticeship would give me money for college, so I registered.

What you picture yourself doing before this?

Cooking is a big turn for me. I always wanted to be an event planner. I love organizing and being my own boss, having control of things. That’s why I like competition; it’s just me. I’m also good at art, and I’m a musician too, but not for a career.

What was it like to compete at a national level?

In some ways, all the competitions are different, but they’re also the same. It’s a black box of ingredients and you usually do three courses. You get what you get, and you cook it according to the rules.

Are cooking competitions as dramatic as they look on TV?

I never watched a lot of culinary TV, but yeah there’s complications and drama. In Edmonton, I lost my courage a bit on the first day. I lost my mojo. I cut myself with a grater and I had to see the First Aid attendant. It was a small cut but I didn’t want to hide it. Then I forgot to put some garnishes on my salad and they docked points so that left me in third place. The second day I just said, “Let’s get this done.”

How much training did you do?

Overall it was about three weeks. The first two weeks, I took the train into Vancouver and practiced at VCC with Chef Mike Steele. It was overwhelming but Mike is so encouraging. He says if you make mistakes now, that’s better than on the stage. The third week, I trained back at SRT. It was nice and quiet there, and they also have the same kind of ovens they use in the competition.

What’s next for your career?

I’ll be at VCC for PC2 (Professional Cook 2) in September. Chef Mike made sure I got to know the community a bit during my training. It will be great to see all the other chefs there.

Meet VCC’s all-star chef instructors and see our kitchens in action. Sign up now for an upcoming free information session at our Downtown campus.