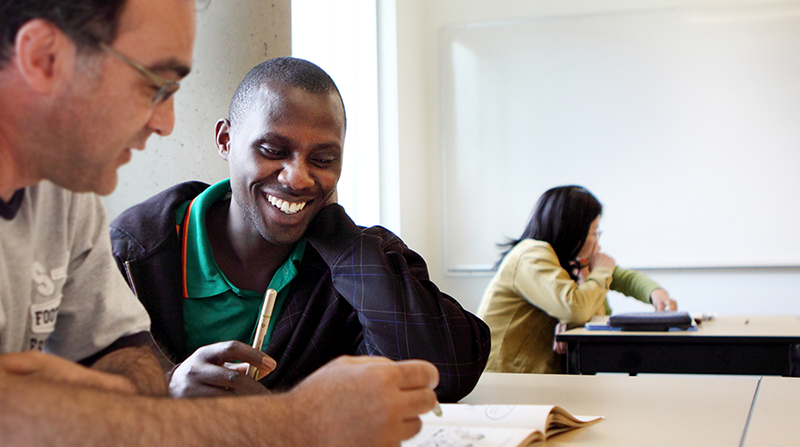 Vancouver Community College (VCC) is pleased to announce that its innovative ESL Pathways program was recognized as the Gold recipient of the Program Excellence Award from Colleges and Institutes Canada (CICan). The award was presented in a ceremony in Ottawa on May 1, 2017.

In contrast with traditional English as a Second Language (ESL) curricula focusing on English literature and grammar, ESL Pathways was created as a practical, culturally sensitive alternative targeting real-world scenarios such as job interviews, informal conversations, and public speaking.

The ESL Pathways program is the result of a provincial government-sponsored curriculum development project aimed at overcoming the known language and cultural barriers newcomers to Canada face in accessing employment and education.

“The Pathways program is more than an English course,” says student Atousa Eskandari. “It covers a diverse range of topics, including usual life, academic study, and the cultural workplace. The course content reflects the challenges every immigrant faces in a new country.”

The new curriculum is also fully aligned with the Canadian Language Benchmarks, providing a common standard of assessment and eliminating the need for re-testing in many other educational and professional settings in Canada.

“Vancouver Community College is often the first place newcomers go when they arrive in British Columbia,” says VCC president and CEO Dr. Peter Nunoda. “I am especially proud of this truly innovative way of teaching ESL— not only for its impact on our students and their confidence, but also for its positive contribution to society.”

VCC officially launched ESL Pathways in 2015 with 100 students and the program has grown remarkably since then. Currently in its fourth year, ESL Pathways has nearly 900 registered students and further growth is anticipated. Additionally, several other B.C. institutions have begun the licensing process for adopting the ESL Pathways curriculum.