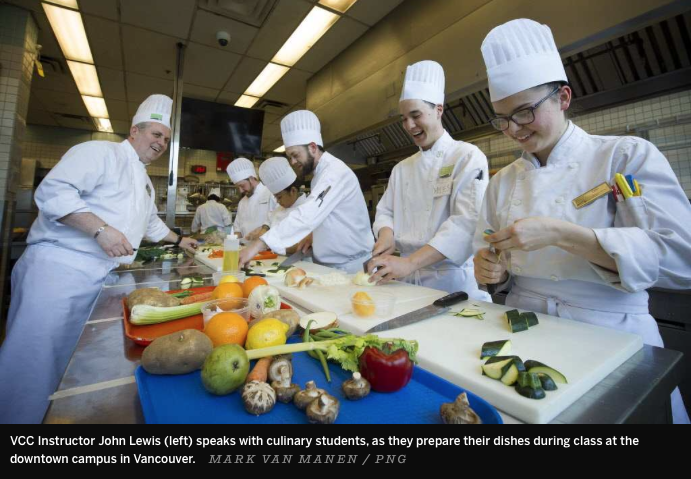 The heat is rising for B.C. restaurant owners, as they brace for the busy tourist season while scrambling to overcome a shortage of cooks and kitchen staff.

The shortage comes from an increase in the number of new restaurants, a lack of new staff to replace retiring baby boomers, and changes to the federal government’s temporary foreign workers program that cut the pool of labour to restaurants, industry observers say.

Mroke said he is starting work around 9 a.m. and finishing as late as midnight, doing kitchen work he would normally hire someone to do. “I would like to be up front promoting my restaurant, but I cannot find a skilled worker like a chef, anybody, to work in the kitchen.”

Mroke has been in business for the past 12 years, but he said he’s never worked as hard.

“I’ll go back myself, start cooking in the kitchen,” he said. “My feet are hurting.”

He said fellow restaurateurs are all facing similar staff shortages, and he worries about how they will handle the summer tourist traffic.

B.C. Restaurant Association President Ian Torstenson said the problem exists throughout B.C., and is most acute in restaurant kitchens.

“With wait staff, you’ve got all the university students, and you can train them fast,” Tostenson said. “But the technical side in the kitchen is where the problem is. We’re just not getting enough interest from people wanting to get into the business.”

The good news for the industry is a healthy provincial economy that has new restaurants opening to meet new demand. Their number stood at about 11,000 province-wide in 2013, with 200 to 300 added to that number each year since then, Tostenson said.

“The boomers are retiring, so that’s creating vacancies,” he added, noting that not enough young Canadians have replaced them.

Changes to the federal government’s temporary foreign worker program made just over a year ago choked off another flexible supply of workers, Tostenson said.

“That just stopped any ability for restaurants to get labour they can’t supply in the domestic market,” he said. “So now you’re seeing in a lot of cases an exhausted industry.”

“I think people sort of forgot about it,” he said. “You are learning a technical trade, by working in the kitchen, that carries you well. It’s a very transportable skill as well — you can take that and go to France or Africa, whatever you want to do.”

At Vancouver Community College, whose downtown campus houses the largest culinary arts program in western Canada, students are themselves feeling the pressure, as they take on paid kitchen jobs even before they complete their training.

“We’re seeing a bit of that, definitely,” said instructor Tobias MacDonald. “It seems a week doesn’t go by that I don’t get a phone call from somebody in industry looking for cooks. There’s real demand for skilled labour.”

VCC trains would-be cooks in the classroom for two technical levels — the first taking seven months and the second taking four months. That training can also be done by apprentices employed in kitchens, who can work between two-days-a-week classroom sessions. The two-day-a-week training was instituted this year because restaurants didn’t want to lose apprentices for five full-time training weeks each year.

Continue reading the full story in the Vancouver Sun.

Interested in VCC's industry-leading culinary arts training programs and apprenticeships? Visit our kitchens and meet our chefs at an upcoming info session.