Clinton’s story: from trauma to triumph 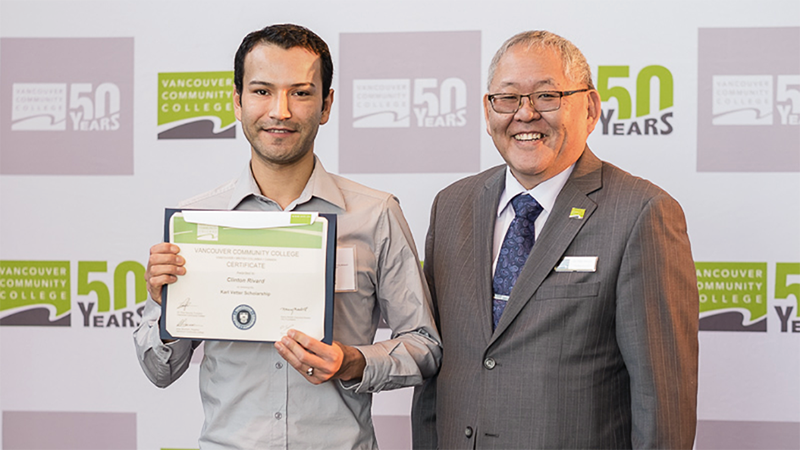 ‌It’s not easy to hear Clinton Rivard talk about his childhood. Born in the small Northern B.C. community of Fort St. James, Clinton grew up in an Aboriginal family plagued by drug and alcohol abuse. Even so, he considers himself to be among the lucky ones. “Many of my friends have ended up homeless,” he says, “but I’ve always had a house key, and I’m really grateful for that.”

Now in his mid-thirties, Clinton is a promising student in VCC’s health unit coordinator program. When he speaks, you can tell he was a smart kid. He brims with proud stories of his parents and grandparents surviving the residential schools era. Sadly, generations later, his own life would also be scarred by tragedy.

At 14, Clinton witnessed what he calls a “traumatic incident” in his home. After giving statements to police and recovering from the initial shock, he soon realized the experience had affected him so deeply that he had lost his ability to concentrate in school. Before entering Grade 8, he dropped out in order to seek psychiatric help.

It took more than a decade of therapy and healing, both with Aboriginal medicine people and professionals as far away as Washington State, before Clinton was ready to resume his education.

Determined to leave Northern B.C., in 2010, Clinton began researching colleges across the province. His criteria were simple: quality adult upgrading courses, a variety of career programs, and close to public transportation. “I sold everything I had and moved to Vancouver specifically to come to VCC,” he says.

A naturally compassionate person, Clinton envisioned a career in health care, possibly nursing. Having no high school education, however, he knew he had plenty of work ahead of him.

Clinton was already enrolled in math and English upgrading courses when he met one of VCC’s Aboriginal advisors one day in the hallway. He then learned about Aboriginal Gateway to Health Careers, a program offered jointly by the Aboriginal Community Career Employment Services Society (ACCESS) and VCC that gives academic and career support to Aboriginal students pursuing careers in health care.

“The Aboriginal Gateway program was awesome,” says Clinton, “not only for the extra skills training but also for introducing me to other like-minded Aboriginals. Some of them are my very best friends now.”

With a new support network, Clinton finally regained the focus needed to let his intelligence shine. Despite his Grade 7 education, Clinton’s initial assessments already placed him in Grade 9 math and Grade 11 English. Another testament to his perseverance, it took less than one year for Clinton to achieve all the high school-level grades required to enter VCC’s health unit coordinator program. In November 2015, Clinton was awarded both the Karl Vetter Scholarship and the HSBC Bank Canada Aboriginal Scholarship for his effort and achievement.

Having recently completed a practicum at UBC Hospital, Clinton is now participating in the hiring process for Nursing Unit Assistant positions.

While pleased with how far he’s come, however, Clinton prefers to draw attention to his peers, like others in the Aboriginal Gateway program as well as his friends and siblings.

“Some have been through even more than me,” he says. “And they’re now finishing social work degrees, nursing degrees, they’re elected representatives for their First Nation bands, they’re raising awareness about missing and murdered Aboriginal women.”

As for Clinton himself, he simply hopes to further the inspiration. “A lot of good people I met along the way have held their light up high for me in my darkest times," he says. “Now hopefully I can add my light to help others find their way."

VCC welcomes learners at all levels of education and from every walk of life. Learn more about tuition-free Adult Basic Education (ABE) and other upgrading options.