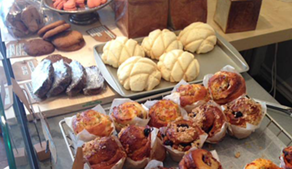 In a chat at her East Vancouver café with the Georgia Straight, Hitomi Syvertsen explains that after she became a mother, she began hosting her friends at her place because she was found it too challenging to go out with her children. When her friends praised her cooking, she became inspired to enroll in Vancouver Community College's culinary program.

After a decade of experience in the food industry, including stints at Pan Pacific Hotel, Four Seasons, Terminal City Club, and the Delta Hotel Burnaby, she collected all of her best recipes and began to think about opening her own business.

Then at an auction, she saw a table she fell in love with. She told herself that if she won the auction for the table, she would pursue her dream.

As the story would have it, she wound up opening Baker and Table Café and Bakery at 6414 Fraser Street on February 3.

If you haven't already guessed, the name comes from what she started with: herself (the baker) and the table (the—wait for it—table).

Her love for repurposing used or old items is reflected not only in her friendship with her faithful table companion (who was hired to support the cash register) but also in the décor, such as her collection of mismatched tables and chairs (which seat up to 16 people), and various household items on display that she collected over the years or brought from Japan.

With her 600-square-foot retail space (the total premises are 1,800 square feet), she's sought to create a homelike feel. She's been successful.

In fact, it's been so cozy that some people have been falling asleep when she puts on jazz music in the background. (She had to switch to putting on the radio.)

"That means people [feel] comfortable here, and they feel secure," she says. "It's so busy outside on Fraser. It's just people go-go-go but you come in here and it's different."

Syvertsen, who hails from Nagoya, Japan, but has lived in Canada for 15 years, offers a combination of Western and Japanese food and baked goods on her menu. With a special attention to ingredients, many of her items are vegan or gluten-free.

In fact, she uses balsamic vinegar instead of soy sauce because, she explains, soy sauce has wheat in it. How thoughtful!

Continue reading in the Georgia Straight.

Learn more about baking and culinary arts at VCC: