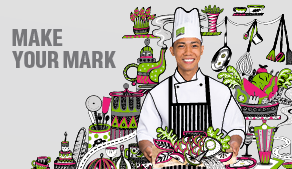 Jefferson Bueno has always been mesmerized by food.

As a kid growing up in the Philippines, Jefferson remembers watching in amazement as pancake batter puffed up in a hot pan. Determined to find what made it happen, he’d wait until his mother was at work (and his eight siblings were otherwise occupied), and then conduct his own experiments with eggs and flour.

Despite his childhood dream of becoming a chef, there were no opportunities for Jefferson to study culinary arts in his hometown, so he entered a computer science program at a local college. With only three months left until graduation, however, Jefferson and his family moved to Canada.

"It didn't even matter to me," he says, about leaving his computer science program unfinished. "My plan was always to pursue my culinary dreams."

Six months after moving to Vancouver, Jefferson was a culinary student at Vancouver Community College (VCC). He says he chose VCC for the practical, hands-on curriculum, highly accomplished instructors, and affordable tuition.

Jefferson was already excited about learning basic French cuisine at VCC; but then he met Chef Tobias. As one of only two Certified Master Chefs in Canada, VCC instructor Tobias MacDonald often draws on his expertise in food science when teaching. For Jefferson, these lessons instantly connected his love of chemistry with his passion for food.

Today, as a Level 2 culinary arts apprentice, Jefferson has not only excelled in his training at VCC, but has already worked in some of the city’s most high-profile kitchens.

When not in school or at work, he spends his spare time in his home kitchen experimenting with foams, "stones," pearls, spheres, powders, liquid nitrogen, and researching all the latest molecular gastronomy trends. "It's a lot of fun," he says, "but also important to remember your culinary foundations and respect every ingredient you’re dealing with."

Jefferson is currently working on a 12-course signature recipe collection, which he’ll self-publish and plans to use as a culinary calling card for future opportunities; perhaps one day even in his own restaurant. "Not everybody has opportunities like this," he says about moving to Canada and finally realizing his dream of becoming a chef. "You can be whatever you want here. You just have to pursue it."

Do you dream of making your mark as a top Canadian chef? Register now for culinary arts programs at VCC.