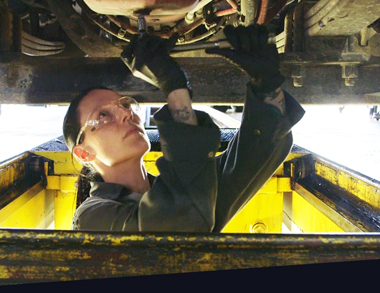 When Leigh Wall was laid off from her job as a legal assistant, she knew she wanted to make a change.

Wall did extensive research about what jobs B.C. employers are looking to fill. “I’ve been in industries where it was difficult to find work.” Wall wanted a job that was in-demand, one where employers “would be knocking on my door” wanting to hire her.

The answer became clear—trades training was the way to go. After looking at what the various trades could offer, Wall decided that heavy duty mechanics would be her vehicle to success.

Wall had no experience working with her hands beyond putting together her own shelves but she saw Vancouver Community College’s introductory course to Heavy Duty/Commercial Transport as a perfect opportunity.

“I knew I would leave with skills I could use,” Wall says. “I would finish the introduction to heavy duty mechanic class and in the very least I could fix my car.”

Since making her decision to re-train in the trades, Wall has completed the program and is now in her second apprenticeship year while working with a company, First Truck Centre Vancouver.

Wall says her employer and co-workers are very supportive, share their extensive experience, and lend a hand at every opportunity.

“A salesman at work who used to be a mechanic asked me if I needed any tools to round out my toolbox,” says Wall. “He brought in a large bucket of tools, including air tools, and just gave them to me.”

Wall has also found a mentor in a female heavy duty mechanic she met at a Skills Canada competition. Wall, defers to her mentor’s extensive experience, simply saying, “She’s a boss.”

Keep reading to learn Leigh’s advice for women in trades at www.newsroom.gov.bc.ca.

Good memories: did you know Leigh won the Cummins Scholarship as a student in 2014? Watch her Student Award video!

VCC’s well-respected Heavy Duty Transportation Trades programs will give you a foundation in mechanics and prepare you for careers such as diesel engine mechanic, commercial transport vehicle mechanic, heavy duty mechanic and trailer mechanic. Students train in a modern, well-equipped shop and work on equipment that replicates actual workplace conditions.