Marvin’s story: hitting the road to a new career 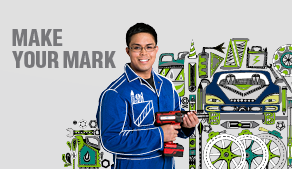 Marvin Omaque has done a lot since high school. Before entering VCC’s automotive service technician (AST) foundation program last year, he had already earned a diploma in criminal justice, climbed the ranks in a local supermarket chain, and fixed cars in an independent garage.

“I don’t regret working anywhere,” he says. “Graduating from high school, sometimes you’re just not sure what you want to do. It’s a big decision to push on young people.”

Over the past few years, however, Marvin had watched many of his close friends earn Red Seal certifications in automotive trades and go on to work at luxury car dealerships.

Sharing his friends’ passion for cars, Marvin began considering the same career path. He asked them about the best places to get training. “They really recommended the VCC program,” he says. “They liked every aspect about it.”

After applying to multiple schools, Marvin made it to the top of VCC’s waitlist in only a few months, and was pleased to start the program sooner than he’d anticipated.

Marvin says VCC was just as his friends had described, and he was especially impressed with the quality and variety of instructors. “They all had their own experiences to share,” he says, “and they give you as much knowledge as they can, without holding back.”

Now finished the AST foundation program, Marvin is off to earn the required apprenticeship hours before returning to VCC for Level 2 training. Looking ahead, he’s excited to see where this new career takes him, whether it be working on BMWs and Mercedes alongside his friends, or opening a shop of his own.

Join us at an upcoming information session to tour of VCC's fully operational automotive shops, meet instructors, and see students in action.