Megan’s story: Opening doors with English as an additional language 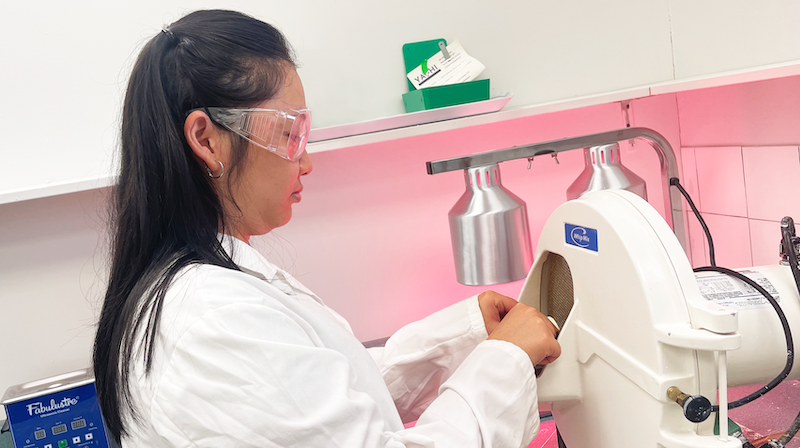 Five years ago, when Vancouver Community College (VCC) Dental Technology Sciences student Megan Haslen first moved to Canada from Vietnam, she knew she needed to improve her English. Like many of the roughly 300,000 new immigrants to Canada each year, however, she also had to work and earn a living.

Megan’s first job here was serving at a local Vietnamese restaurant. On most days, she says she worked until closing time, after which she also did the cleaning. “I would be going home at 4 a.m.,” she says.

Megan had already tried some English as an additional language (EAL) courses at another college but couldn’t make them work with her schedule. “I didn’t have the time, so I gave up,” she says.

VCC’s classes were also newly being offered online due to COVID-19 pandemic restrictions. “Zoom was really convenient for me,” says Megan. “Classes were done by 11:30 a.m. I could still go to work after, and I didn’t have to travel.”

VCC’s ESL Pathways classes helped Megan gain the skills and confidence she was looking for, but she says it wasn’t always easy. Megan already knew some Mandarin and Cantonese, but English was a different challenge. She recalls nearly giving up again while spending a whole week working on a single essay. “It was a really hard time in my life,” she says, but explains that she kept going because of her mother. “She told me she just wants to see my certificate. That’s why I try my best to keep going.”

Megan also credits her VCC instructors for keeping her focused on improving. “The ‘hardest’ teachers helped me learn the best,” she says now.

By the fall of 2021, Megan was confident enough in her English to take a new career step and entered VCC’s Dental Technology Sciences program.

As a young teen in Vietnam, Megan had been injured and lost a front tooth when a robber kicked her off the bicycle she was riding. Having lived with a missing tooth for nearly a decade, Megan wanted to learn the technology that could help herself and others restore their smiles. In fact, as one of her first hands-on projects in VCC’s dental technology lab, Megan created her own first denture with the help of her instructor. “It’s really nice,” she says.

This summer, Megan is completing her first work term at a local dental technology lab before returning for the second year of her program.

With a combination of English fluency and valuable job skills, Megan is excited about her future in Canada and now laughs at the English mistakes that used to feel so embarrassing. “I just want to improve my knowledge,” she says.

What will Megan take on next? She plans to write her citizenship test soon while also starting the process to sponsor her parents to join her in Canada.

It’s never too late to get the English skills you need. Register now for VCC’s tuition-free EAL courses starting in September.