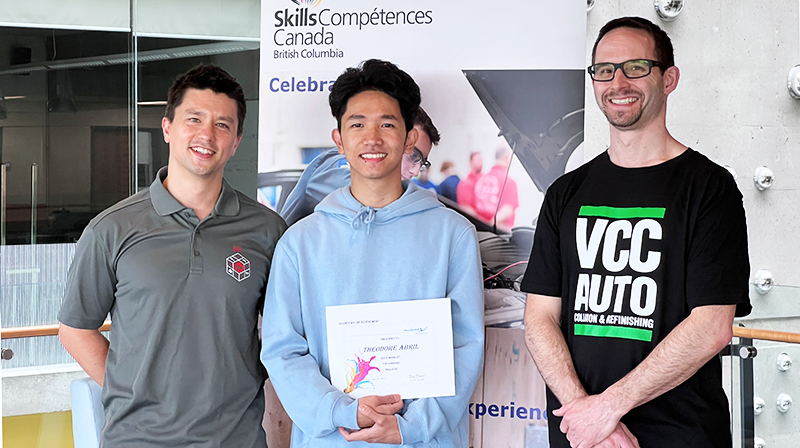 Like most other high school grads, Theodore (Theo) Abril recently faced this question. He liked computers and video games. He thought maybe he’d work in information technology or engineering. He also liked photography. Then his friends started getting interested in cars.

Fast-forward a couple years and Theo is standing on the Skills Canada podium as the country’s top student car painter – not a bad start to his new career.

Theo recalls his first impressions of Vancouver Community College’s (VCC) Automotive Collision and Refinishing Foundation program. “I was shy,” he says, “but I liked the college a lot. The shop had all the equipment, and the instructors were really good.”

After a few weeks of safety training, Theo says he was excited to start working with his hands. By the end of his first year, he had proudly painted a whole side panel of a car pearl white in VCC’s state-of-the-art downdraft paint booth. “It was a great experience for me,” he says.

Noticing his talent and excitement for the trade, Theo’s instructors recommended that he compete in Skills Canada competitions where went on to win gold medals at both regional and provincial levels in early 2022. By the end of May, Theo found himself representing VCC on the national stage at the Skills Canada 2022 National Competition held this year at the Vancouver Convention Centre.

While he missed his classmates around him, Theo says he simply had to focus on his work during the two-day event. A typically cool and relaxed guy, Theo admits now that his scariest moment of the competition came at the end of the first day when he realized he’d forgotten to repair a deep scratch before priming and painting a bumper – unforgivingly, in pearl white. “I most likely lost points for that,” he says.

After the second day, however. Theo knew he was on track for a medal, even though he won’t fully admit it. “Maybe,” he says, smiling. “I was just doing my own thing not looking at everyone else.”

The sky’s the limit

Of the nearly one million job openings predicted in B.C. over the next ten years, 413,000 (41 per cent) will require college or apprenticeship training (while only 36 percent will require a university degree). In short, our province needs talented tradespeople like Theo. Fortunately, there is plenty of support for them to succeed.

Along with his golden hardware and bragging rights, Theo’s national win also earned him a $2,500 award from paint company AksoNobel. This summer, Theo has also been hired to earn his apprenticeship hours at Colorworks Express Autobody, one of the top-rated shops in Vancouver.

“I love the hand-eye coordination of painting. It’s satisfying,” Theo says. He also confesses, “I might be kind of a perfectionist” – something his customers no doubt appreciate.

This fall, Theo plans to return to VCC for his Level 2 trade certification. After that, he’s simply excited to keep working on new and different vehicles. “I’d love to paint a Lamborghini one day,” he says. “Once I get experience, I’d like to get into painting aircraft.”

We have a feeling he will. Congratulations and well done, Theo!

Join B.C.’s future with an automotive career. Learn more about VCC’s programs from Youth Train in Trades to foundation and apprenticeship programs in collision and refinishing or automotive service.