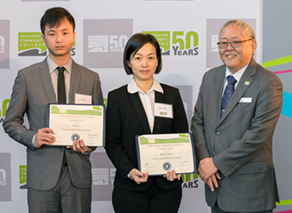 Robert Lin is enthusiastic and reliable, with a talent for business management and a passion for customer service. Voted “most likely to succeed” by his 2015 graduating class at Vancouver Community College (VCC), he excelled in his practicum at the Fairmont Vancouver Airport Hotel, and has now been accepted to numerous graduate programs in the United States.

Robert’s career choice wasn’t always obvious, however. In fact, his path to working in hospitality began in a rather inhospitable place: the Taiwanese Navy.

As in many countries around the world, Taiwan requires all men between the ages of 18 and 36 to serve in the military for one year. Robert first spent a year studying English literature at university, and then entered his military service, soon finding himself on a Taiwanese Navy vessel travelling the world.

“It was a challenging year,” he says, “but it really opened my eyes to the world beyond Taiwan.”

After Robert’s superior officers learned about his English studies, he was frequently called in to help with communications and translations. It was this experience supporting the greater organization that Robert says led him to conisder career options in business, customer service, and international travel.

Finally, a family trip to a luxury resort in Las Vegas solidified his decision to pursue hospitality management. “It’s just a special experience to be able to work in such beautiful surroundings, and ensure that tourists have a wonderful vacation,” he says.

Once his decision was made, Robert began researching hospitality management programs around the world. He says he chose VCC because of its international reputation and four-year degree option. During his time at VCC, Robert says he also really benefited from the hospitality program’s many industry connections, and especially the 500-hour work experience component.

Robert emphasizes that his success at VCC is also due in large part to the free tutoring in math, accounting, and English he received at the VCC Learning Centre. “The tutors taught me so many things ... I would especially like to thank Kari Karlsbjerg her support and help.”

Another major highlight for Robert was the multicultural environment he found on campus. “VCC gave me an invaluable understanding and appreciation of cultures from around the world,” he says.

As Vancouver’s hospitality industry continues to boom, so do job opportunities across the region. Robert, however, is looking further ahead. “I want to keep studying and try new things while I’m young,” he says. “A master’s degree has always been my dream. A great career will come next.”