The man behind some of Vancouver's greatest chefs 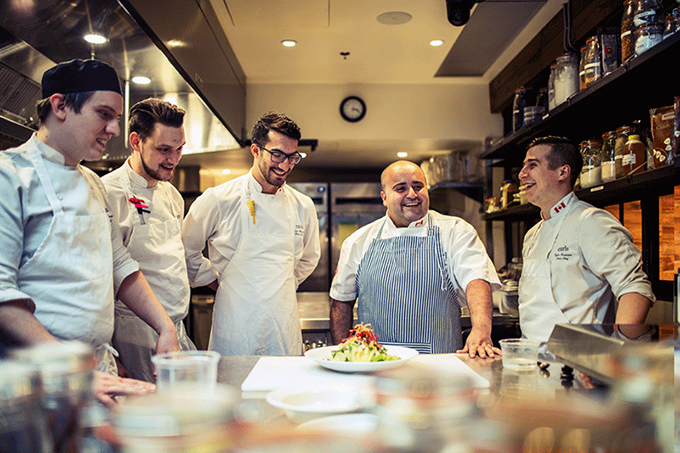 ‌‌There’s a hushed reverence at the pass as cooks plate the first course of a prix fixe meal under chef Hamid Salimian’s watchful eye. This could easily be a scene from any fine dining restaurant, but it’s actually the prelude to a Chef’s Table pop-up dinner hosted by Salimian’s students in the international culinary program at Vancouver Community College.‌

Salimian started out himself as a VCC culinary arts student back in 1996 before landing an apprenticeship at the Sutton Place Hotel and making his mark in culinary competition. Through it all, he’s been fuelled by curiosity and passion for his craft. “There’s an incredibly high standard that he brings to every project he gets involved with,” says Scott Jaeger, co-owner of The Pear Tree and a fellow member of Culinary Team Canada. “Hamid doesn’t do anything halfway—he’s all in. When you see him around other people, particularly with his students, it’s infectious.”

As its coach, Salimian led Team B.C. to a silver medal at the 2012 World Culinary Olympics, and his mentorship was also key to Alex Chen’s top-10 finish with Canada’s Bocuse d’Or 2013 team. But Salimian is just as supportive of his former colleagues at Diva at the Met, and continues to mentor many of them—including Montgomery Lau (executive chef, Secret Location), Brandon Pirie (chef instructor, Project Chef), and Robert Milhorn (executive sous chef, Boulevard)—as they travel their own culinary paths.

Yet, according to fellow chef instructor Tobias MacDonald, it’s Salimian’s work at his alma mater where he’s making the biggest difference. “He’s inquisitive about the process of cooking instead of taking it for granted, and his approach is a great way of inspiring students. It renews their curiosity and excitement and, deep down, it helps them to realize that there are more possibilities out there.”

Read the original article and see all 2016 Restaurant Award winners in Vancouver Magazine.

Interested in VCC's industry-leading culinary arts training programs and apprenticeships? Visit our kitchens and meet our chefs at an upcoming info session.