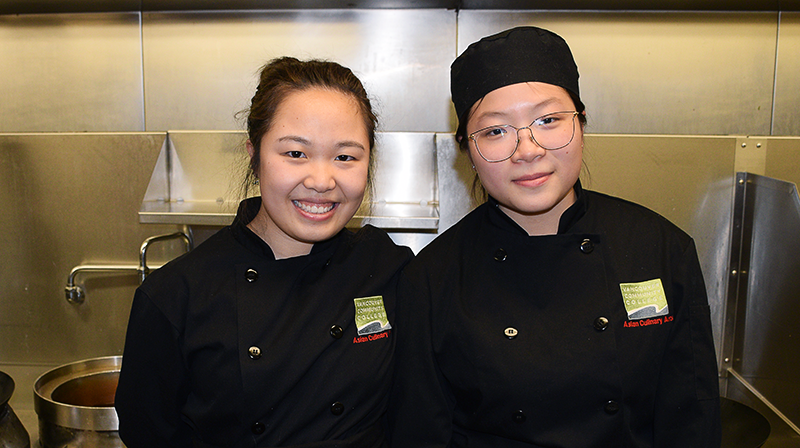 Last month in Macau, elite chefs from more than 40 countries faced off at the 2019 World Master Chefs Competition for Cantonese Cuisine (WMCCCC). Among the culinary professionals were two graduates of Vancouver Community College’s (VCC) Asian culinary arts program — who not only competed but also earned bronze in the dim sum category.

“I think it was their passion, patience, and creativity,” says Barry Tsang, VCC’s Asian culinary arts department head, who handpicked Yuanyin (Doris) Lau and Simin (Joey) Zhou for the competition. “I saw their performance in class and I knew they’d do well.”

Lau and Zhou spent six weeks designing, testing, practicing, and perfecting a secret dim sum (steamed dumpling) recipe. What they unveiled at WMCCCC was a dessert with a transparent dough in the shape of a sea lion with a purple yam and sesame paste stuffing. The creation brought forth both international students’ strengths, as Lau had experience in baking and pastry arts and Zhou received professional dim sum training in Mainland China.

“They also had the foundation they got from the Asian culinary arts program and they were able to use that because in the program we make everything from scratch, including our own dim sum wrappers and filling,” says Tsang.

This isn’t VCC’s first win at WMCCCC. In 2017, 19-year-old VCC alumnus Tristan Toderan and partner Dylan Viray claimed silver in the entrée category. The wins, says Tsang, are a testament to the Asian culinary arts program’s long history of preparing students for the real world. In fact, in 2020, the offering will celebrate its 45th anniversary — making it the longest running full-time program of its kind in North America, according to Tsang.

“This program started in 1975 and the fact that we continue to have students every single intake tells me we are doing something right,” says Tsang. “During the five months, students spend a lot of time in the kitchen learning to prepare 150 dishes from places like China, Japan, Korea, Thailand, and Vietnam. That prepares them to work in any Asian restaurant.”

Meet VCC’s all-star chefs and check out our custom Asian kitchens. Sign up now for our next free information session.