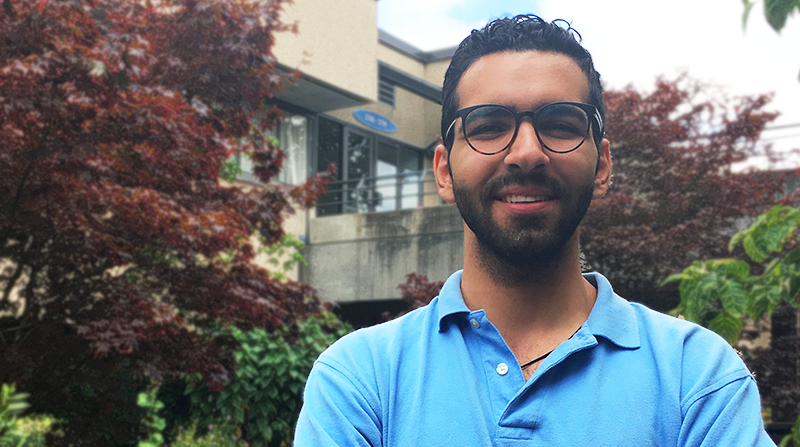 Amir Taghinia has accomplished a lot since arriving in Vancouver as a refugee only 10 months ago. He’s found a place to live, started a full-time job, enrolled in school, learned to cook, and even goes to the gym.

His sponsors and friends are duly impressed. For Amir, however, it’s not enough. After spending almost five years facing danger and uncertainty on a remote Pacific island, his new status in Canada is no excuse to sit back and relax.

Amir says he’s always been a “troublemaker.” Growing up in Iran, he was considered a political dissident by the time he was a teenager. “I like to question things,” he says. “I want to change things that don’t work.”

At only 15 years old, Amir fled Iran and went to Malaysia. A few years later, he travelled to Indonesia, and from there to Australia, hoping to claim asylum under United Nations regulations.

No man is an island

Instead of starting a new life in Australia, however, Amir was shipped to Manus Island, a detention centre off the shores of Papua New Guinea, where he joined 1,500 other men from around the world.

“They fed us disaster food,” he says. “There was no hygiene. The dorms were overcrowded, filthy, and mouldy. It was a tropical, humid island with 35 to 40-degree heat. We were fenced in and they treated us worse than animals.”

Amir says he and his fellow detainees were harassed and beaten regularly. Some were even killed, yet the Australian guards faced no repercussions.

Even under these conditions, Amir emerged as a leader, staging protests and helping people write letters. At one point, he smuggled a cell phone into his dorm and gave a live interview on Australian radio. Afterwards, he was put in solitary confinement for 14 days.

In researching his options for escape, Amir eventually discovered Canada’s Private Sponsorship of Refugees Program. He then connected via Facebook with a Canadian immunization nurse who had previously worked on the island. Soon, her whole family became involved in sponsoring Amir to come to Canada.

In November 2017, Amir landed in Vancouver as a full Canadian resident. Within days, he was giving interviews to Australian news. By February, Amir was ready to return to school – something he had not done since he was 15.

To start, settlement organization MOSAIC referred Amir to Vancouver Community College (VCC) for an assessment. Despite his limited education, Amir, now in his mid-20s, tested at Grade 11 English, entirely surpassing the need for English as a Second Language (ESL) courses. Within two months, he had also upgraded from Basic to Grade 10 math through VCC’s self-paced Adult Basic Education (ABE) programs. “My teachers really assisted me to find my way,” he says.

Despite these accomplishments, Amir continues to struggle with trauma and institutionalization. “When you’re imprisoned for five years, it’s very hard to enjoy freedom anymore,” he says.

Amir says his transition to an independent life has also felt isolating. “On that island, I had 1,500 people that were constantly in contact with me, needing my help." he says. "In Vancouver, people are so reserved.”

Still, Amir looks ahead with hope. “It will be a matter of time,” he says.

With full high-school credentials on the horizon, Amir is now considering a university degree in law or psychology, with plans to continue fighting for refugees and human rights around the world.

Everyone deserves an education. Adult Basic Education (ABE) courses are tuition-free in British Columbia as of September 2017. Learn more at UpgradeBC.ca.

Read more about The Many Faces of Adult Basic Education.