Chef Bingley boils it down to the basics 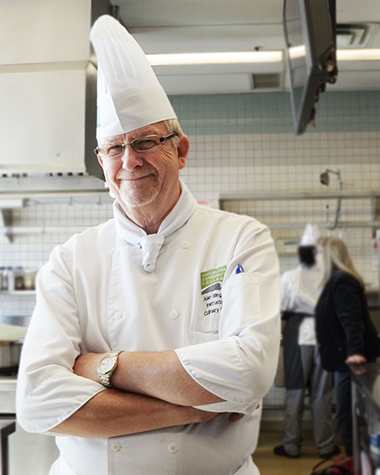 As Vancouver Community College’s longest-serving employee, 70-year-old Alan Bingley has seen a lot of changes in his 45 years as a culinary arts instructor. For Alan, however, it still comes down to the basics when teaching aspiring chefs the skills it takes to succeed.

Alan was classically trained in cooking and “silver service,” getting his start at the historic Royal Victoria Hotel in his hometown of Sheffield, England. He immigrated to Canada when he was 25, securing his first job as a sous chef at Vancouver’s landmark Devonshire Hotel before joining VCC in 1971. At the time, he was one of only five instructors.

Given his length of time at VCC, it’s a safe bet that most of the 12,200 chefs who have graduated from VCC’s culinary arts program had Chef Bingley as an instructor. For many students, he would have been one of their very first teachers. “I’m the greeter,” he says with a chuckle.

A taste for teaching

Never tempted to open his own restaurant, Alan says he found his life’s work in teaching. He notes he “gets his jollies” watching students go on to make a living at something they love as much as he does.

“We’re all here for the same thing and I’m just a small cog in the wheel helping them along a little bit,” he says. “When I see a student do well and make a name for themselves, then I’ve done my part. That’s what it’s really all about—why I’ve been here so long and why I love my work.”

What does it take to be a good teacher? “A lot of patience, bringing things down to their level and making it enjoyable,” he says. Alan considers himself “old school” and “a bit of a stickler” for what it means to don a chef’s uniform. He believes setting an example and instilling a sense of self-respect, pride, and teamwork are as important as teaching the cooking fundamentals.

Alan has seen many cooking trends come and go over years. “Cooking is like fashion,” he observes. “It goes through phases and fads, but always comes back to the basics. It doesn’t have to be fancy or overindulgent to be good—it all stems from French cookery and it’s important to remember those roots.”

He believes it’s an instructor’s role to give students the foundation on which to build and develop their own signature flair. “We try to show them the right way,” Alan says. “If they’re really serious about it, it’s up to them to work hard, because it doesn’t come easy.”

While some demonstrate natural talent and a signature style while under his tutelage, he says others also blossom after graduation. In either case, he speaks with pride about his students.

One former student is Jean Carlo (J.C.) Felicello, now also an instructor in VCC’s international culinary arts program and manager of Culinary Team Canada. “I have to take my hat off to J.C.—he sleeps and eats being a chef and has put this program on the map.”

That regard is mutual. “I came into culinary school as an arrogant, spoiled 17 year old,” J.C. recalls. “Within minutes, Mr. Bingley made things very clear. I saw that discipline was the key to success, which garnered respect. I may have forgotten what he said in class, but have never forgotten how he made me feel.”

Little did Alan know, that when he joined VCC 45 years ago, he would be still be here to help VCC celebrate its 50th anniversary.

Chef Bingley reunited with many of his former students at VCC’s 50 Years. 50 Chefs. gala. “Just seeing the students again was overwhelming, to say the least. As I’m coming towards the end of my career, it made me so very proud to be a part of the best culinary program in Canada.”

Alan has also announced his plan to retire at the end of March 2016. While looking forward to focusing on his hobbies such as gardening and playing guitar—yes, your chef instructor is also a member of the Hell’s Gate Blues Band—he admits retirement will come with some measure of emotion. “I know I will shed a few tears,” he says. “Where did those years go?”

Do you have any special connections to VCC alumni or faculty members? Join us in celebrating their careers at VCC’s 50th Anniversary Bash on Friday, April 8 at our Broadway campus. Get tickets here.