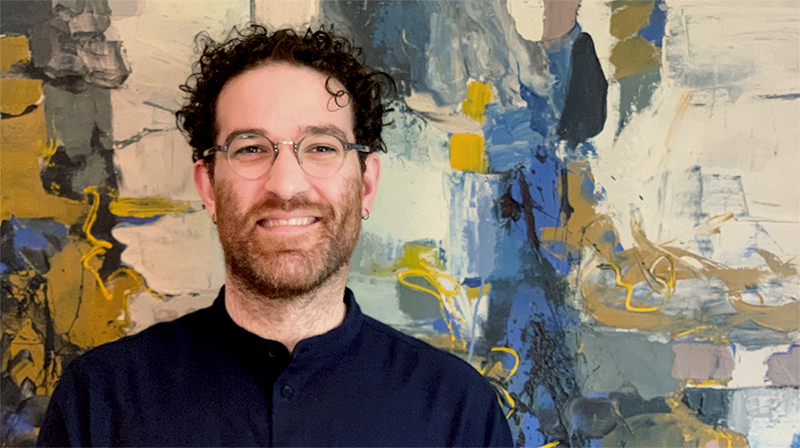 Most people would say they like music. They may even love it. When it comes to jazz musicians, however, they live it.

For recent VCC Bachelor of Applied Music grad David Blake, this devotion started young, as a typical teenage affinity to classic rock transformed into a lifelong passion for jazz guitar.

In celebration of International Jazz Day (April 30), and as David gears up for his next chapter as a master’s student at New York University (NYU), he looks back on his complex journey and what it means to live and breathe this extraordinary genre.

By the time David finished high school, jazz had already taken a firm hold. “I figured if I have to go to college, it’s going to be for music,” he says. “I knew I wanted to be a jazz guitar player but I didn’t really know what that meant.”

Despite having talent to spare, David struggled with post-secondary education. He remembers himself as an 18-year-old, failing most of his first-term courses at Capilano College (now University) and only showing up for ensemble practices. “I wasn’t ready for school,” he says. “I just had a bad attitude.”

Over the next decade, David continued to drop in and out of post-secondary music programs at both Capilano and the University of Toronto. “I’d hit a wall,” he says, remembering each time he quit out of frustration.

Even without a formal bachelor’s degree, David continued to grow into a strong and experienced musician. He credits much of his development to instruction and mentorship from certain Capilano instructors like Mary Jo Bischoff, Brad Turner, and Jared Burrows, David Occhipinti and Dave Young in Toronto, and his Vancouver jazz “heroes” Darren Radtke, Steve Kaldestad, and particularly Bill Coon.

In his pursuit of jazz, David naturally became a fixture in Vancouver’s music community. He recorded several independent albums and built a successful career around performing, teaching at the VSO School of Music, and curating popular concerts at the Tangent Café and for the Vancouver International Jazz Festival.

Like many committed jazz musicians, David also made the occasional pilgrimage to New York City, immersing himself in its vibrant music scene and taking lessons with acclaimed guitarist Lage Lund. It was during one of these demanding (and expensive) trips, however, that David says he realized he was battling depression, and returned to Vancouver to seek help.

“It was many years of hard work and struggling,” David says of his treatment, but he’s grateful for the new perspectives it gave him, including a fresh take on school. “I was able to grapple with many of the issues that prevented my success, like struggling with authority and being afraid to ask for help when I needed it.”

Then, during a jazz workshop in the summer of 2019, renowned Canadian saxophonist Phil Dwyer suggested David pursue a master’s degree, and he surprised himself by considering higher education once again.

David soon applied and was accepted to a master’s program at New York University (NYU), but on one condition: that he complete the bachelor’s degree that had haunted him for over a decade. That’s when David approached VCC about finishing his Bachelor of Applied Music quickly, easily, and close to home.

“I went into VCC thinking this is going be another grind,” David admits. “I was thrilled to find that VCC faculty were some of the most phenomenal university teachers I’d had ever had,” he says, endorsing Deirdre Morgan, Ken Morrison, and guitar instructor Daryl Jahnke in particular.

What is this thing called jazz?

Charmingly cool and self-deprecating, David will be the first to admit that his story is not the best example for up-and-coming music students. Yet after nearly 20 years of playing, teaching, and honing his craft, David’s appreciation for jazz is deep, intelligent, and infectious.

At the core of jazz is improvisation – making up music as you play – a technique rooted in African American music of the 1920s that by nature represented “freedom.”

“Improvising seems scary at first,” says David, “but it’s really not.” For aspiring jazz artists, David recommends simply listening to as much of the music as possible. “You need to know what you’re after – what it means,” he says.

Next comes practice, and lots of it. Once jazz chord progressions and scales are internalized, David says a musician can summon them without thinking. “They’re there because you spent the time,” he says.

After that, David approaches improvising as a natural process of creating tension and release – something he says we are very used to feeling already, as filmmakers, authors, even chefs play with tension and resolution in their creative expression.

Finally, comes commitment. From A+ students to restlessly creative souls, “nobody is going to get very far just learning a ‘little bit’ about jazz,” David says. “You need to become fairly obsessed with it.”

Please join us in wishing very best to Vancouver’s own David Blake as he heads to NYU this fall!

Explore your own musical potential in any genre through VCC Music programs and courses. Applications are now open for September 2021 with auditions in May and June.