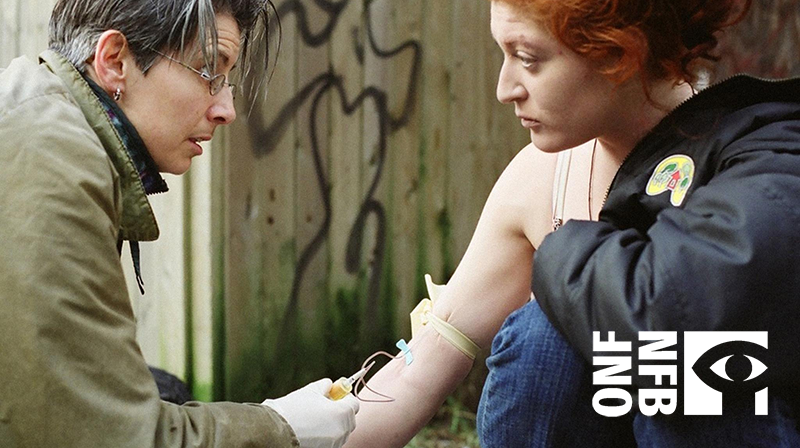 This National Nursing Week, (May 6 - 12, 2019) Canada’s National Film Board (NFB) is re-releasing Bevel Up, an innovative documentary featuring the day-to-day work of street nurses who provide care for people who use drugs in Downtown Vancouver.

Originally produced in 2007 with the B.C. Centre for Disease Control (BCCDC), Bevel Up is a raw and impactful 45-minute film offering a first-hand look at street nursing in Vancouver’s Downtown Eastside (DTES). Vancouver Community College (VCC) nursing instructor Caroline Brunt is featured prominently in the film, demonstrating non-judgemental, compassionate, and trauma-informed health care to people who use drugs.

“There was really nothing but love and support from people in the DTES,” says Caroline about the making of the film. “They kept telling us ‘people don’t understand us,’ and ‘this film needs to get made.’”

The re-release of Bevel Up is a timely effort to offer education to health care workers and the public in the midst of today’s unprecedented overdose crisis. The digital version offers greater online accessibility and additional learning resources, including bonus interview clips with health care practitioners and people who use drugs, as well as a 100-page Teacher’s Guide.

“The stigma exists today as it existed back in 2007,” says Caroline. “The issue of substance use will never go away. This film teaches how to accept, love, and care for people where they’re at.”

Bevel Up was created in collaboration with Canada Wild Productions Ltd. and directed by award-winning filmmaker Nettie Wild. The 2019 re-release was made possible with additional support by the British Columbia Women’s Hospital & Health Centre, the University of Victoria’s Canadian Institute for Substance Use Research (CISUR), and VCC.

The public is welcome to attend a free screening of Bevel Up followed by a panel discussion on Thursday, May 9, 5:30 p.m. at St. Paul's Hospital. REGISTER HERE >

Please note: this film contains coarse language, open drug use, and subject matter that some people may find disturbing or triggering.

Do you have a heart for health care? Learn more about prerequisites, programs, and career options in VCC Health Sciences.