Helen’s story: the voices of angels 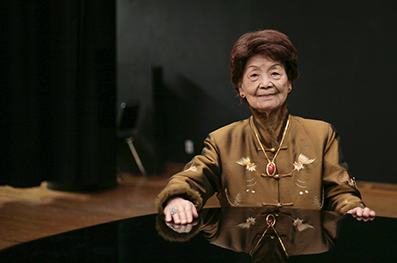 It’s Tuesday night in the Vancouver Community College auditorium and the members of the Willan Choir are gathering for their weekly rehearsal.

The accompanist plays a medley of show tunes in the background as approximately 40 singers, nearly all senior citizens, laugh and joke, some even breaking into dance before the rehearsal is called to order.

Helen Fung, a soprano, is already seated in her usual spot. Front row, fourth from the right. She watches the antics of a few grey-bearded baritones—evidently the class clowns—through smiling eyes.

The choir’s longest-standing member, Helen joined in 1979 when she was 64 years old. Last November, this musical family helped celebrate her 100th birthday.

The Willan Choir, a mixed-voice community ensemble by the VCC School of Music, recently celebrated a milestone of its own—its 40th anniversary.

It was in 1975 that founder Jon Washburn (now artistic director of the Vancouver Chamber Choir) first envisioned an audition-free, amateur ensemble that would nonetheless tackle top classical repertoire. There were those who doubted he could do it. He quickly proved them wrong.

With today’s vocal warm-ups complete, conductor Patricia Plumley gathers everyone around the piano to learn a new piece.

Normally, a fellow soprano would offer Helen an elbow and usher her across the room to join the group. And normally, Helen would gladly take it, less for the assistance walking than for the simple touch and warmth of a friend. Today, though, she has come prepared for an interview.

Helen waves her hand in the direction of the singers, indicating, ‘they’ll be fine without me.’ She then reaches into a canvas shopping bag and pulls out a bright red folder decorated with stickers of purple violets. Inside is a meticulous collection of photos, programs, notes, and certificates documenting her century of life. 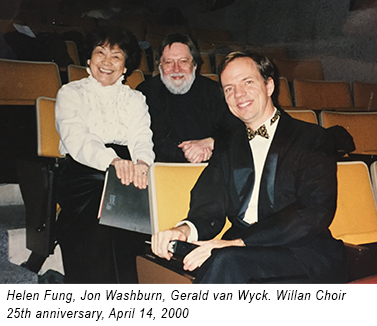 Growing up in Hong Kong, Helen’s first experience with singing was in a church children’s choir at the age of six. “I wasn’t very good,” she says, laughing. “But I liked it very much!”

Never one to sit still, Helen found her career in teaching. In the 1930s and 40s, she owned and operated two kindergartens in Hong Kong. For 20 years after that, she worked in primary and middle schools. It wasn’t until 1970, at the age of 55, that she and her family moved to Canada.

Finding herself retired and living in a new country, Helen turned to both music and Tai Chi to keep busy.  She fondly remembers each of the many Vancouver community centres and senior centres where she served as a volunteer Tai Chi instructor over the past 30 years.

She then pulls from her bag and carefully unrolls a ‘90s-era promotional poster from the Canadian Mental Health Association with the title, “What have you done for your mental health lately?” In the top left corner is none other than Helen, in her mid-80s, wearing a bright, sunflower blouse, and stretching low to the ground in an expert Tai Chi pose.

As the choir continues to rehearse loudly not 10 feet away, Helen continues talking over the music. In her folder are photographs of decades-past Willan Choir concerts, including one of her sitting in these very seats with original conductor Jon Washburn. Alongside these old photos are crisp, new certificates from both Queen Elizabeth II and Prime Minister Justin Trudeau congratulating Helen on 100 years.

Without even being asked, Helen’s conversations drift naturally into advice for health and longevity. One would imagine she’s been asked for her secret many times: Never stop exercising (she aims for one hour of Tai Chi daily), pay attention to what you eat, maintain a healthy weight, take care of your skin.

Of course, even the healthiest centenarians have difficult days. In Helen’s case, however, an unwavering positivity is what truly seems to seems keep her going. And for her, it’s when she’s singing that she taps into the ultimate joy.

“I feel like my friends are angels flying and singing,” she says, waving at the choir, her voice hitting a higher pitch with every word. “When I sing, I feel like I’m in heaven!”

The VCC School of Music has something for everyone, from industry-leading bachelor’s and diploma programs to part-time and community-based courses. Learn more at an upcoming information session.