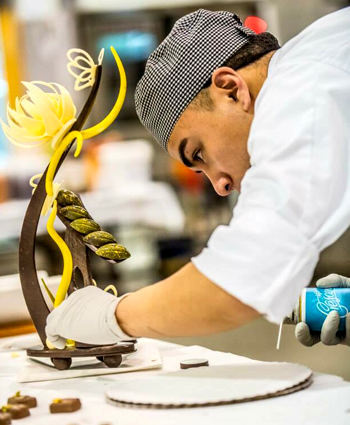 If you ever find yourself in need of an impromptu marzipan figurine, you’d better hope Austin Granados is nearby.

Over the past few months, the 21-year-old VCC baking and pastry arts student spent countless hours perfecting his pastry techniques in campus kitchens. On April 15, his hard work paid off with a gold medal at the Skills Canada BC provincial competition held in Abbotsford. Six weeks later, after more exhaustive practice, Austin was competing again, this time sponsored by the Tourism Industry Partners Society (TIPS) to attend the Skills Canada national competition in Saskatoon.

When the judges announced Austin’s name as the national gold medal winner for 2015, he could hardly believe his ears. “I was speechless. I was paralyzed,” he says.

Each year, hundreds of skilled trade and technology students from both high school and post-secondary programs compete for a spot on the Skills Canada podium. While baking is delicate work, Austin will attest that the contest itself is not for the faint of heart.

For the provincial competition, post-secondary bakers are given a highly structured eight-hour window in which to produce many specific items to exacting standards. These include marzipan figurines, numerous French pastries, mousse cakes, chocolates—both moulded and hand-dipped—and sculpted chocolate show pieces. The national competition lasts for not one, but two days at five hours each and includes these same elements but adds a “mystery box” of ingredients.

"It was super intense and super fun at the same time," says Austin, who spent the night before competition day fine-tuning his marzipan figurines (a beaver and praying mantis) in his hotel room.

Growing up in Winnipeg in a food-loving Filipino family, Austin says it just felt right to pursue cooking and baking as a career. During a culinary career skills program in high school, Austin’s teacher recommended culinary arts at VCC. For a creative and energetic young guy excited to travel, Vancouver was the perfect destination.‌

Austin first completed culinary arts level one at VCC before moving into the baking and pastry arts program. Eventually, he says he’d like to obtain his Red Seal in both areas. It’s not that he can’t decide—he just wants to do it all!

Even as he strove for perfection in both the provincial and national competitions, Austin says he never expected to win gold. He jokes about the mistakes he made —dropping a delicate chocolate flower right front of the audience, burning some pineapple under the scrutinizing gaze of the judges. Austin’s casual, positive attitude is contagious, but the easygoing way in which he describes the many pastries and techniques also hints at how deep-rooted his knowledge really is.

Above all, Austin attributes his success to the support of his family, friends and especially his VCC instructors, namely Nancy McRae and Alan Dobko, who oversaw his extracurricular training during the week and were right there alongside him on many an eight-hour Saturday trial run. For future Skills Canada competitors, Austin’s advice is simple. "Show up to practice," he says. "It makes a huge difference." And when you’re on the road with no kitchen? Apparently a bit of marzipan in your bag can come in handy too. 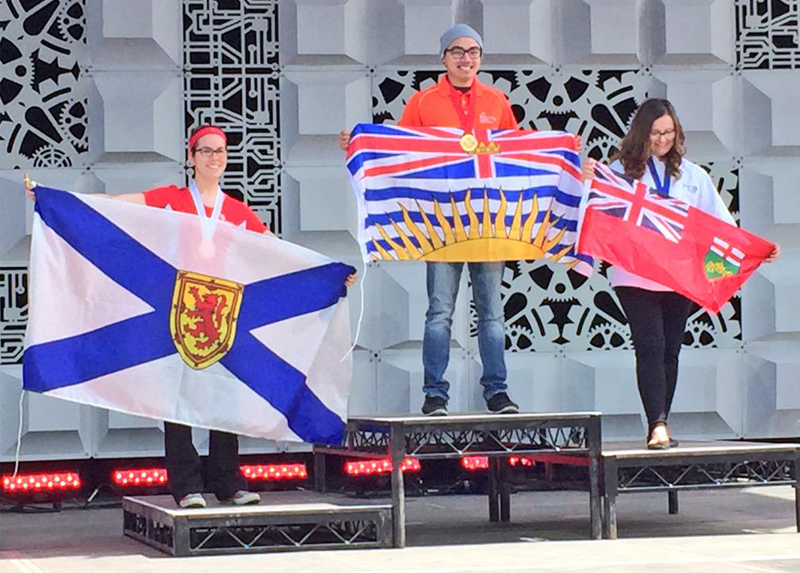 The participation of Austin and his instructors in the Skills Canada national competition was made possible by a generous travel donation by the Tourism Industry Partners Society.

Interested in exploring the sweetest career on earth? Learn more about VCC baking and pastry arts programs at an upcoming info session.