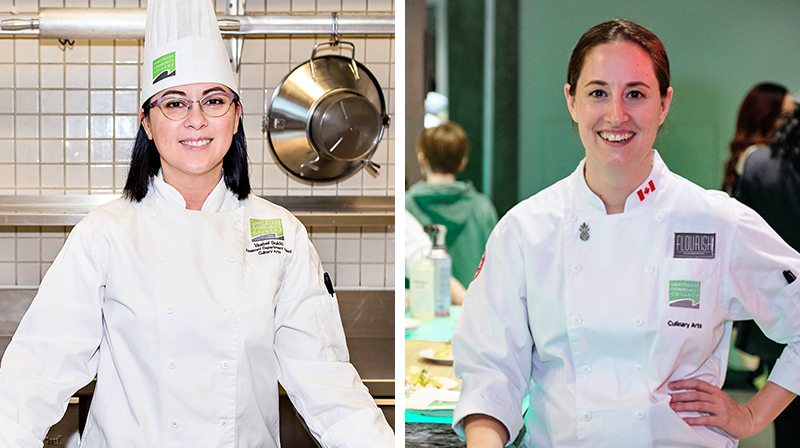 There are amazing women chefs out there. We see them in restaurants and hotels, we read about them, and we celebrate them. This International Women’s Day, at Vancouver Community College (VCC), we want to recognize the incredible progress that women have made in the culinary industry, but also take an honest look at how far we still have to go.

Chef Ysabel Sukic has a huge amount of professional cooking experience. After training at VCC in the mid-90’s and earning her Red Seal, she went on to work in a variety of kitchens from luxury hotels and fine dining restaurants to private yachts. In 2006, she joined VCC as an instructional assistant and also earned the prestigious Certified Chef de Cuisine (CCC) designation. In January 2020, Ysabel was elected department head at VCC Culinary Arts – the first woman to ever hold this position.

Looking at her career thus far, Ysabel remembers often trying to fit in as the only woman in the kitchen. “There were a lot of questions about my capability,” she says. Ysabel remembers never doubting her own skill or commitment, yet getting passed up for promotions and having to show skills far above the bar to be taken seriously. In one hotel, she remembers a chef genuinely asking why she wasn’t working in housekeeping.

“I tweaked my personality to be ‘one of the boys,’” remembers Ysabel. “It’s sad, but it made my life easier. It kept me from getting bullied out of the industry.” Today, she somewhat regrets this compromise, but also recognizes that it got her where she is today. “Now, I can hire women and stand up for them,” she says.

Top of the class

One of VCC’s newest instructional assistants, Chef Erin Vickars, joined the college in November 2019. Over the past 14 years, Erin has worked in some of Vancouver’s finest hotel restaurants and private clubs, cooked for a sailing company, and completed a stage with triple-Michelin chef Dominique Crenn in San Francisco, all in addition to earning her Red Seal, sommelier certificate, and CCC designation.

Erin was always outnumbered by men in kitchens, but her outgoing personality and absolute love of cooking didn’t leave much room for intimidation. “When you truly fall in love with food, the rest falls away,” she says. “I enjoyed the ride. I never felt like I was working.”

It wasn’t until Erin began exploring the elite levels of Canada’s culinary industry that she began to feel the absence of women at the table. After completing her CCC exam in 2019 as the only woman in her cohort (and for exclusively male judges), she was surprised to learn how few women in Canada actually hold this title.

Another moment that surprised Erin was when Canadian chef Lynn Crawford became the first woman to hold the title of executive chef at any of the Four Seasons’ properties around the world. The year was 2006. “It blew my mind,” says Erin. “We were in the mid-2000’s and we had yet to have a female executive chef in a hotel.”

Both Erin and Ysabel agree that things have changed for the better since they started in the industry, and that education will be key to continued progress. “To be a good chef, you need to be highly intellectual,” says Erin, who dreams of connecting trades like cooking with university programs in environmental sciences or medicine.

Ysabel believes that education is the best thing to foster respect and mutual understanding, and encourages women who are passionate about cooking to support each other and to strive for advanced trades credentials. She also wishes more women would pursue leadership in local chefs’ associations, which are still primarily made up of men. “If decision makers all have the same perspectives and experiences, you’ll never know if you’re wrong!” she says.

Its’s 2020. You very likely know a woman chef. Perhaps you know a woman auto mechanic, CEO, or tech entrepreneur. Take this International Women’s Day to celebrate them, but also ask: why aren’t there more?