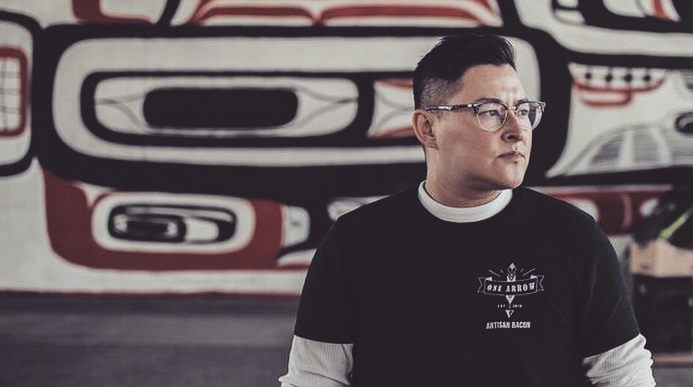 Heat Laliberte never wanted to be a chef. When he moved from rural Saskatchewan to Vancouver at age 20, his hobby was dancing. He was busy, too, touring with a hip-hop troupe and performing across the United States, but never earning enough to do it full-time.

To make ends meet, Heat applied to be a server at Moxie’s Grill & Bar. They didn’t need servers, however. They needed cooks, and over the next decade, what started as a “side job” would become Heat’s profession, his passion, and his path to success.

As an Indigenous kid growing up in foster care, Heat remembers struggling with poverty. Raised in a non-Indigenous family, he feels that he also lost much of his cultural identity. In the end, even growing up and moving away only offered a brief escape. Shortly after Heat came to B.C., his 19-year-old brother was killed in a violent crime. A year later, his mother died of a drug overdose.

At this point, Heat was working as a cook at the Westin Grand Hotel. “I wasn’t really going anywhere,” he says. That’s when his chefs suggested a trade certificate. “They had only the best things to say about the instructors and the programs at VCC.”

With no savings or family support, Heat began researching his options, eventually turning to the Aboriginal Community Career Employment Services Society (ACCESS) for help. Here, he received funding through their ACCESS Trades program to enrol in VCC culinary arts. “I was so broke,” he says. “I just really wanted that trade ticket. It would mean I accomplished something.”

A world of opportunity

Heat excelled in culinary school and apprenticed in some of Vancouver’s most upscale and demanding kitchens. He also enjoyed the competitive edge that came from being in class with cooks from other top restaurants. “You get to see their ideas and what they cook, and you’re all pushing each other to be more creative,” he says.

And culinary school was only the beginning. In 2016, Heat travelled to Brazil to work as head chef at USA House during the Rio 2016 Olympic Games. In February 2018, he worked as a private event chef during the Winter Olympic Games in PyeongChang, Korea. “There’s no way you could have told a 15-year-old me that I would be cooking all around the world,” he says. “I would have laughed.”

Today, Heat is pursuing a long-time interest in charcuterie, making and selling artisanal bacon under his own brand, One Arrow, available at Vancouver Farmers Markets.

While some chefs may shy away from the risks of entrepreneurship, Heat is fulfilling a lifelong dream for independence. “I make everything start to finish and I love being able to sell it to my customers face-to-face,” he says. “It doesn’t get any better than that.”

Learn more about the opportunities, support, and facilities available to Indigenous students at VCC by contacting our Indigenous Education and Community Engagement office.

Have a flair for food? Explore your options for a cooking career at an upcoming free info session and kitchen tour with VCC Culinary Arts.