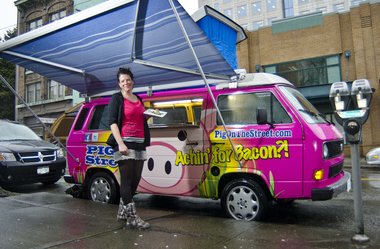 Kristan “Krissy” Seymour didn’t always know she wanted to sling bacon street side — she just loved getting her hands dirty.

“I've always been a kinesthetic learner, so being in a hands-on-type career was very important to me,” she says.

Seymour, the co-owner of famed Vancouver food truck Pig on the Street, became a street staple back in spring 2012 as she and partner (in love and business) rolled onto the fledgling food truck scene in their bright pink van.

Jumping into the culinary world was a natural choice for this English expat. Originally born in Ottawa, Seymour moved as a child to Cornwall, England, and then to Vancouver just a few years ago with husband Mark after falling in love with the city on their honeymoon.

After spending a few years satisfying her wanderlust travelling across New Zealand, Australia and Europe, Seymour decided to take her love of food to the next level and enroled in the Culinary Arts program here at Vancouver Community College in 2001.

“I had a fair amount of [culinary] experience, but I wanted to get my techniques down and learn some different angles on cooking.”

During her time at VCC, one course in particular would serve her well in her future role as co-proprietor of Pig on the Street: butchery.

But her inspiration to start Pig on the Street came when she and Mark began craving bacon sandwiches on a camping trip in their Westy campervan. The two managed to convert the camper into a mobile bacon machine, and after winning a coveted City of Vancouver permit in the first round, Pig on the Street was born.

Since then, the couple and their bacon biz have been featured on Eat St. on the Food Network. Their bacon-slinging season begins again on April 20 and they can usually be found on the 700 block of Howe Street, near the Vancouver Art Gallery.

And although providing meals on wheels definitely isn’t a traditional culinary career, Seymour wouldn’t have it any other way.

“The food truck world is fun and challenging, but very rewarding. It's a tough business. We have learnt a lot since opening and I know we will never stop learning. But that's the fun of it, isn't it?