Vanvisa’s story: The courage to cook 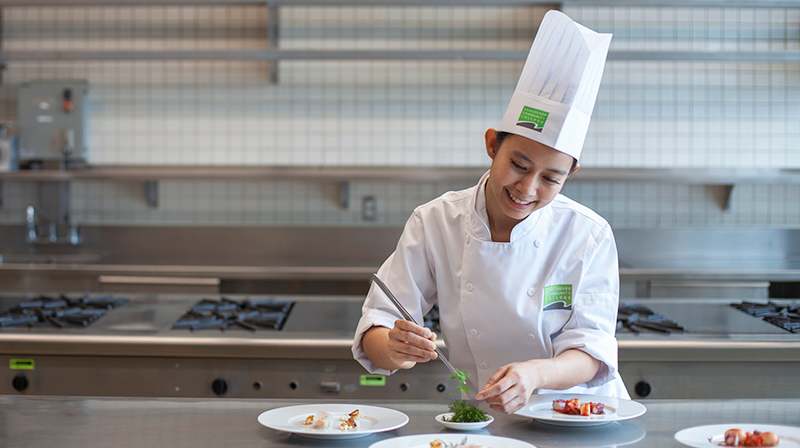 In the kitchen, Vancouver Community College (VCC) Level 2 culinary arts apprentice Vanvisa Sataglamp embraces every opportunity she can. In her life and work, she’s already moved overseas, learned a new language, and cooked in some of Vancouver’s top establishments – but it’s clear her culinary rise has only just begun.

Growing up in Thailand, Vanvisa was always fascinated by food and cooking. Yet while her mother worked as a baker, formal culinary arts training was uncommon and expensive, and prepared food typically came from street stalls, not restaurants.

Following a more traditional path, Vanvisa completed a bachelor’s degree in business accounting and began working in offices. Within a few years, however, Vanvisa was drawn back to her dream of cooking as well as travelling overseas. In 2016, she came to Vancouver for the first time with a temporary visa to work at a local Thai restaurant.

Vanvisa says she chose Vancouver for its mild winter weather. “I knew I was going to have culture shock,” she says. “I didn’t want to have weather shock too!”

The weather must have suited her fine, because Vanvisa quickly returned to study culinary arts as an international student at VCC, a school that came highly recommended in the local restaurant industry.

As a woman in her mid-thirties, Vanvisa says she appreciated Canada’s openness to career re-training as well as the wide diversity of students at VCC. “Some classmates were older and some younger than me. They didn’t discriminate for age or gender. Everyone was the same in the kitchen,” she says.

When asked what she likes most about the culinary industry, Vanvisa’s answer may surprise some – or not, considering her business school background. “I love the time management,” she says. “Time is a limited resource in the kitchen. Each task takes a different amount of time and you can’t replay it.”

Welcome to the family

It’s been an exciting year for Vanvisa. In Spring 2020, she received VCC’s Mueller Family Culinary Arts Award recognizing her hard work, passion for food, and positivity in the face of challenges. In the summer, she appeared as the face of VCC’s Savour the VCC Effect advertising campaign. In November, Vanvisa graduated with her Professional Cook 1 Plus certificate, was named valedictorian, and delivered a heartfelt speech to the entire graduating class in a language she’d only recently learned.

“I tell international students you don’t need to be a native speaker,” she says. “Don’t be afraid; you can adapt!”

After graduating, Vanvisa had no trouble finding work in B.C.’s rapidly recovering hospitality industry, and she is grateful to VCC instructor Hamid Salimian for his recommendation which landed her a job at one of Vancouver’s top hotels, the Fairmont Pacific Rim. While thoroughly enjoying the hotel and catering industry, Vanvisa is also currently pursuing her Professional Cook 2 trades certificate through VCC.

As she continues to expand her culinary experience, Vanvisa says she’s continually impressed to find that VCC is highly recognized, and our culinary grads are everywhere. “Most of my coworkers, even my sous chef graduated from VCC,” she says. “It’s like a big family. It makes me so proud.”

Feed your passion. Apply now to Professional Cook 1 Plus at VCC ­– intakes monthly.