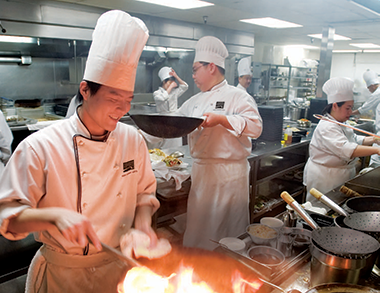 For the past 41 years, students at North America’s only Asian Culinary Arts program have been learning the techniques of cooking Cantonese cuisine with additional lessons in Mandarin and Szechuan cooking, dim sum and barbecue. However, as the Lower Mainland’s population and industry demand have evolved, so has the programming at the Vancouver Community College (VCC) offering.

“In 1975, there weren’t many Chinese restaurants and the ones that were around had a hard time hiring people, so VCC wanted to train local people who were originally from China and Hong Kong so they could earn a living,” explains Barry Tsang, himself a former student of the program and the head of VCC’s Asian culinary arts department. “Now, the students are from all over the world and Vancouver’s restaurant scene changed so we expanded to include more Southeast Asian countries.”

And while the full-time, 20-week offering covers theory and practical training in the classroom and in a fully equipped commercial kitchen, which operates in conjunction with a cafeteria open to the public, it isn’t only for those looking to launch a culinary career, says Tsang.

“All the recipes we taught used to be commercial so they couldn’t be made at home but now we include recipes students can make at home,” he says. “So, some of our students are just looking to learn new skills they can enjoy with their family and friends. But all of those who apply need to have a passion and love cooking.”

During their time in the certificate program, students learn to prepare and cook meat, poultry, seafood and vegetables using cooking methods such as stirfrying, pan-frying, deep-frying, broiling, braising and steaming. Also covered are food safety and sanitation standards as well as the business side of restaurant operations, including food purchasing, and inventory procedures.

“After two or three months, I can really see confidence building up in students and see they are becoming professionals,” says Tsang. “When they finish here, students should be able to work in restaurants that specialize in Chinese cuisine.”

VCC’s Asian Culinary Arts program has two intakes per year, one in February and the other in September.