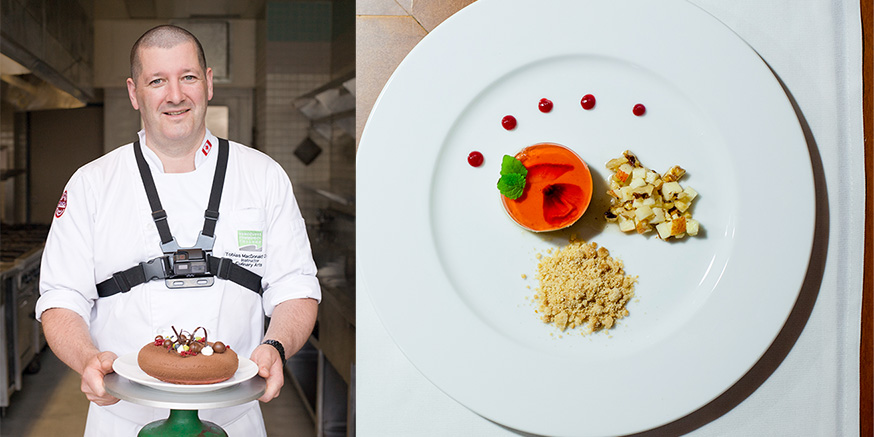 Vancouver Community College’s culinary arts program has earned a reputation as one of the best training grounds for B.C. chefs. Grads have gone on to work at such respected places as Fairmont Hotels, Earls Kitchen and Bar, Pan Pacific Hotel Vancouver, and Hawksworth Restaurant, among many others.

COVID-19 isn’t putting a pause on developing the chefs of tomorrow.

Chef instructor Tobias MacDonald is a certified master chef who has been teaching at VCC for the past eight years.

When he received the CMC title, the highest culinary designation in Canada, in 2015, he was just the second person to do so. Only four other people in the country hold the esteemed rank.

It’s just one of several culinary achievements for MacDonald. He competed with Culinary Team Canada over a period of several years and helped it earn multiple gold medals at the Culinary Olympics. He has also coached Culinary Team Canada, as well as the junior national team. From 2010 to 2012, he qualified to represent Canada in the World Association of Chefs Societies’ Global Chefs’ Challenge, winning the semifinals for North and South America and placing third in the finals in South Korea.

Although the global pandemic hasn’t stopped VCC from training future chefs, operations look much different now than they did in the recent past.

Three of the VCC kitchens have transformed into commissary space where support staff prepares meals for residents of the Downtown Eastside.

“Otherwise, it is a bit of a ghost town,” MacDonald tells the Straight. “Students have been all working remotely since mid-March and will continue to until we get the Provincial Health Officer guidelines in the next few weeks.”

There’s a Zoom lecture daily to provide the theory and academic side, as well as activities, quizzes, and assignments via a Moodle online classroom. Students are also tasked with completing short essays (or video essays), a small research project, and other assignments.

Learn the latest culinary techniques from VCC's award-winning chefs. Sign up now for our next free information session.